The first and only Soviet president and father of Perestroika, Mikhail Gorbachev, says that the great public support for Vladimir Putin can be explained by the people’s reluctance for change in an extremely complicated and tense international situation.

“Russia has a lot of problems in the current situation and the international situation is very complicated. This causes the people’s natural desire to play it safe and make decisions without hurrying,” Gorbachev told RIA Novosti regarding Putin’s announcement on Wednesday that he would run in the 2018 presidential election.

“Today Putin is really the leader who justly enjoys the support of the people and this must be taken into consideration. I think this is what should be targeted – the inclinations of the people,” he added.

“I can see that he has not treated this problem lightly, he understood that the responsibility was great. We can say that the opinions of citizens are matching – the intelligentsia and the workers, all citizens are united in the opinion that, it looks like, the president’s work should continue for one more term.”

Gobachev also noted that he personally remains a supporter of the principle of rotation of power, but realizes that in the current political situation, it is better not to make hasty decisions. 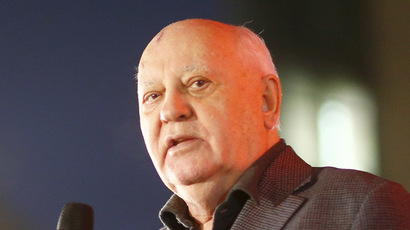 “Of course it is necessary to give way to new generations; this is a very important principle. But there are situations in history and in life when you have to make some corrections in order not to lose the guidance and make the right choice, together with the people,” he said.

“I think that in this situation we are living through a moment when ‘no hurry’ must become our slogan. Let us sort everything out. I think this is why Putin has not announced his position for so long,” Gorbachev said.

This is not the first time Gorbachev has praised Putin’s achievements as president. In 2014, he said that Russians must remember that Putin saved the country from collapse, adding that preserving Russia as a united and sovereign nation was a “historic deed.”

Education Secretary Vows to Have Schools Reopened in the Fall: Theyve Fallen Behind

Venezuelan, Cuban Refugees Call on Trump to Help Free Their Countries From Communism

ESPN Writer Apologizes for Expletive Sent to Senator Over China