The conservative Austria's People's Party and the far-right Freedom Party forged the alliance, Austrian public broadcaster ORF reported on Friday. The People Party's Sebastian Kurz will be the new chancellor. The Freedom Party's Heinz-Christian Stache will be his deputy. Kurz, 31, will be Europe's youngest leader.This development comes after elections in October.It would make Austria the only country in Western Europe to have a far-right party in government. It is the first time the far right is in an Austrian government coalition in more than 10 years.Austria was governed by a coalition led by Chancellor Christian Kern's Social Democrats and Kurz's People's Party, but that partnership collapsed in May, prompting a snap vote. The People's Party won the election but needed to form a coalition because it didn't win a majority of the votes. The Freedom Party has a long history in Austria's Parliament and was part of a coalition government between 2000 and 2005. 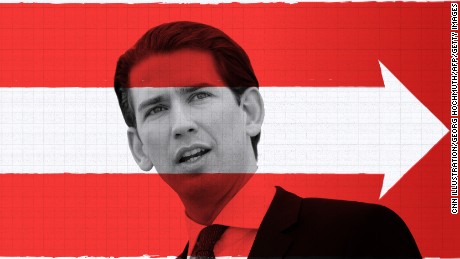 There has been a rise across Europe of populist far-right parties, many of which have campaigned on anti-immigration platforms.Immigration has dominated the campaign. Kurz has taken a hard line, calling for limits on the number of refugees entering Europe and benefits cuts for EU migrants living in Austria.In 2016, Kurz spearheaded a border crackdown across the Balkans designed to stem the flow of migrants, and this year he proposed plans to seal off the Mediterranean route to Europe.