But the most powerful couple in US gymnastics history, who coached legends Nadia Comaneci, Mary Lou Retton and Kerri Strug, said they can't recall numerous details about what happened at their ranch in Huntsville, Texas, such as whether former USA Gymnastics doctor Larry Nassar was licensed to practice there or who was responsible for keeping the gymnasts secure.In depositions obtained exclusively by CNN, the Karolyis said they had very little to do with the day-to-day operation of the ranch when it served as a training site for the women's national gymnastics team. Their depositions, given in May of 2017, are part of a civil lawsuit filed by former elite gymnast Mattie Larson, which claims that the Karolyis "turned a blind-eye to the perpetrator Nassar's sexual abuse of children at the Ranch."Nassar has pleaded guilty to criminal sexual conduct in two cases and to federal child pornography charges. He is serving prison sentences of up to 175 years.Karolyi Ranch, a 2,000-acre compound about 70 miles north of Houston, wasn't just a gymnastics mecca bearing the coaches' names. It became the US Women's National Team Training Center in 2001 and a US Olympic Training Site in 2011 — during many of the same years Nassar was the national team doctor. But Martha Karolyi, the national team coordinator from 2001 to 2016, said Nassar seldom came to the ranch. When asked if she knew whether Nassar had a license to practice medicine in Texas, she said that wasn't something she would be aware of. She had no part in selecting him as the team doctor, she said, but she assumed he had an appropriate license.Gym built on fear: Geddert abuse allegationsWhen Nassar did come to the ranch, Martha Karolyi said, he wasn't under her supervision — rather, he reported to a USA Gymnastics official who was usually at the training camp. National team gymnasts who trained at the ranch have a very different perspective on who was in charge. "Martha was the national team coordinator but the way I saw it, she sort of had control over anything and everything that went on at the ranch," said 2012 Olympic gold medalist Jordyn Wieber. "She knew what was going on every second in the gym. She knew how many routines that we did. She knew what we were eating. She knew our treatments. So it was just, when you go there, you know that Martha is watching. Everything you're doing, she's watching." 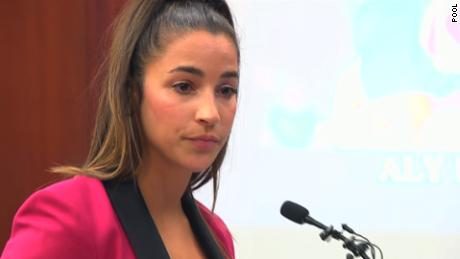 Wieber and fellow Olympic champions Aly Raisman and McKayla Maroney sometimes roomed together during their training sessions at the Karolyi ranch. It was there, in their cabin, Wieber said, where they confided in each other about the abuse they suffered at the hands of Nassar. "We just thought it was very strange that he did this weird medical treatment, this weird technique," she explained.The procedure, which he performed for years under the guise of helping with several different types of injuries, involved inserting his fingers into their vaginas, often without wearing surgical gloves. He claimed it was a ground-breaking technique he had developed that involved manipulating the pelvic floor.Martha Karolyi lays the blame for Nassar's actions on USAG, and frequently distanced herself from the disgraced doctor in her deposition."Well, he was hired by USA Gymnastics," she testified, adding later that "he definitely wasn't hired by me or reported to me." While that may be technically true, both Wieber and Larson say they often observed Nassar speaking to Martha Karolyi, giving her reports on their physical conditions. 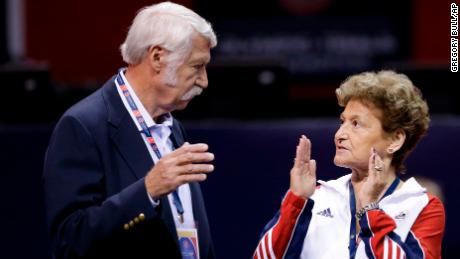 "They definitely had a relationship," said Larson, who described Martha Karolyi as a prison warden. "She had no problem in showing that she picked favorites, so whenever her athletes were injured or had a problem, she'd be talking to Larry about it."The Karolyis' attorney, Gary Jewell, objected to 41 questions related to Nassar during Martha Karolyi's three-and-a-half hour sworn deposition. The doctor treated gymnasts on her property for more than a decade.But in responses to the questions she did answer, Karolyi emphasized she had limited interaction with the team doctor, saying she never called him. "I didn't call but periodically maybe he would give me a report."When asked if Nassar ever called her, her response was still vague. "Maybe. Possible. Yes."Though there were no official written camp rules, it was understood that adults were not allowed in the area where the gymnasts' cabins were located.But Nassar would often treat the gymnasts after-hours in the "social hour room" — the room at the far end of the cabins. Martha Karolyi, who called it the "end room," said it housed two massage tables.When asked if she knew the type of therapy that Dr. Nassar was giving during evenings in the end room, Martha Karolyi replied, "I never had questioned his therapies." She said she saw Nassar doing "some manipulations with arms and things like that."Bela Karolyi, when asked if he got along with Nassar, replied that he "did not like his personality." 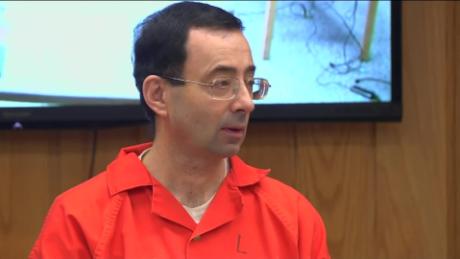 John Manly, Larson's attorney, pressed Martha Karolyi during her deposition on what she may have witnessed while Nassar was treating the gymnasts. "Did you ever see them face down where they'd be disrobed below the waist and a towel over their buttocks. Did you ever see that?Martha answered, "I didn't," but then added, "I don't recall seeing that, but — oh no. I don't think so."The legendary coach says it wasn't until she got a phone call from then-USAG President Steve Penny in June 2015 that she had any idea that the doctor was abusing young gymnasts."Absolutely not," Martha Karolyi responded when asked if she was aware prior to that point of any sexual misconduct by an adult at the ranch.Both Martha and Bela Karolyi claimed to have little, if any, responsibility while national elite gymnasts trained at their ranch one week every month. The semi-nationalized system required national team gymnasts to make regular visits with their personal coaches to the ranch to foster unity among gymnasts who were scattered across the country. 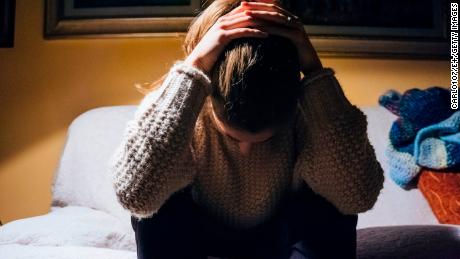 During the deposition, Martha Karolyi described her responsibilities as making sure the gymnasts were prepared for competition and to help perfect their routines.When asked who was responsible for security during her tenure as the national team coordinator from 2001 to 2016, Martha Karolyi said she didn't know. "I really wasn't in charge of organizing that. I don't know.""Who was in charge of making sure the girls were safe in their cabins, if anyone?" Manly asked."I'm not sure, I think the USA Gymnastics representatives checked that everything good with the girls," Martha Karolyi said.Bela Karolyi reinforced his wife's assertions during his own deposition. "USAG had the guidelines and rules and policies and that was reinforced by Kathy Kelly, the representative of USA Gymnastics," Bela Karolyi testified when he was asked if there were any rules to follow at their training camp.He said that after his retirement in 2001, he didn't interfere with the relationships between coaches and athletes. 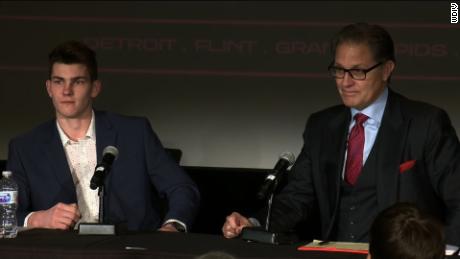 Kelly, a prominent figure in women's gymnastics going back to the 1990s, was a common presence at the Karolyi gym during the frequent week-long training sessions.CNN attempted to reach Kelly but did not get a reply.When asked about USAG's role at the ranch, the group would not comment."USA Gymnastics declines to comment due to pending legal matters," it said in a statement.Though she was the vice president of USAG, gymnasts and trainers alike say it looked as if Kelly reported to Martha Karolyi during her time at the ranch."USA Gymnastics pretty much gave (Martha Karolyi) free rein because they wanted to win," former athletic trainer Melanie Seaman told CNN. Seaman worked for USAG until 2006 and spent time at the Karolyi gym. "Martha ran the show."Seaman, who left in 2006 and later worked for the Tulsa Ballet, said she came forward to support the young gymnasts. "Not one adult has come forward, not one coach, to back up what these girls were saying."Law enforcement is listening now. With Nassar now a convicted child molester serving a life sentence, other investigations have been launched, including a joint investigation by the Walker County Sheriff's office and the Texas Rangers Division regarding any alleged misconduct at the ranch. 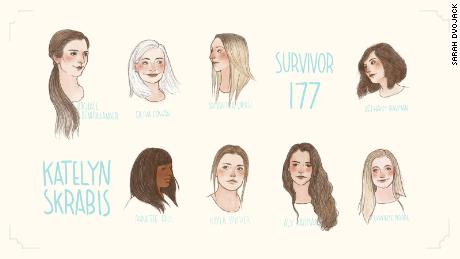 CNN has reached out to the Karolyis' attorneys for comment. They have not responded.Martha Karolyi departed the 2016 Olympics on top of the world, credited with creating a system that produced a record number of medals for women's gymnastics. With a pending sale of her beloved ranch to USA Gymnastics, she set the stage to join her husband Bela in retirement, leaving behind a well-built machine to churn out medal-winning gymnasts for years to come. Now, the sale is off, and USAG has cut all ties with their ranch. The Karolyi name is now tarnished, due to its association with one of the biggest sex abuse scandals in Olympic history.The Karolyis' denials mirror those of other adults and organizations who say they had no knowledge of the abuse young gymnasts suffered at the hands of the serial child molester."I wanted them to be safe, but I had my duties," Martha Karolyi said in her deposition. "And my duties were very specifically about the training and some other people responsible for other parts."