Clark also received a gunshot wound to his side and another to his left thigh, Omalu said. Clark's death was "not instantaneous," Omalu told reporters, estimating the father of two died between 3 to 10 minutes after being shot. "You could reasonably conclude that he received seven gunshot wounds from his back," Omalu said. Each of those bullets possessed "a fatal capacity," he said. "Meaning that, out of all the seven, all he needed to have died was just one of the seven." Omalu announced the results of his autopsy as the public outcry over Clark's death — which prompted several days of demonstrations at Sacramento City Hall and outside NBA games — continues to grow.Attorneys for Clark's family said at a news conference Friday that the autopsy results contradict the account of the shooting presented by Sacramento police. "The narrative that had been put forth was that they had to open fire because he was charging at them," said Benjamin Crump, one of the Clark family's lawyers. "Well obviously, based on Dr. Omalu's findings and the family's autopsy, it suggests all the bullets were from behind."Omalu, a forensic pathologist and the co-founder of the Brain Injury Research Institute, is credited with discovering chronic traumatic encephalopathy (CTE) in professional football players.An autopsy conducted by the Sacramento County Coroner earlier this week on Clark's body determined the cause of death as multiple gunshot wounds, and the manner of death was homicide, according to a preliminary autopsy report. 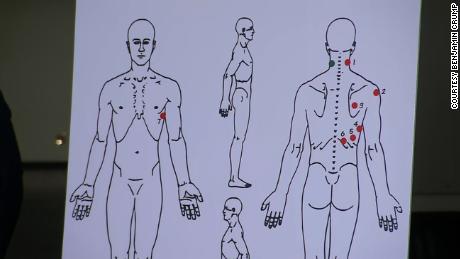 But authorities have not released the full report, which will be withheld until the case is adjudicated in court. A representative for the coroner's office said it will not be releasing the exact number of gunshots that hit Clark at this time. Reporters also questioned Omalu on the significance of officers' delay in providing Clark with medical attention. Bodycam footage of the incident released by Sacramento police last week showed officers did not immediately render aid after firing at Clark.Omalu wouldn't say whether Clark would still be alive if he'd been given medical attention as soon as he was shot, but added, "Whether you're fatally wounded or not, you should receive immediate and timely medical and surgical intervention." Read more: The CTE pioneer who conducted Stephon Clark's second autopsy

In a statement released Friday, the Sacramento Police Department said it had not seen the autopsy report from the coroner's office. "Further comment by the Sacramento Police Department prior to the release of the coroner's report, along with the official review by the Sacramento County district attorney and the California Department of Justice, would be inappropriate at this time," the statement said. "We acknowledge the importance of this case to all in our community and we are committed to a thorough and comprehensive investigation."Police had previously said officers fired 20 shots at Clark on the evening of March 18, when they responded to a 911 call about a man who was breaking car windows. Police said they pursued a man — later identified as Clark — who hopped a fence into his grandmother's property. 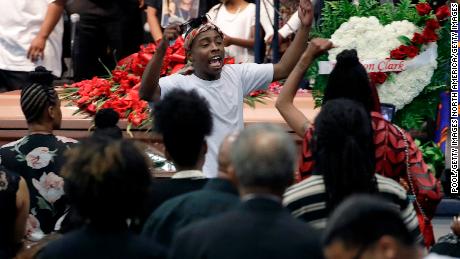 In a statement, Crump elaborated on the attorneys' assertion Sacramento police have mischaracterized their encounter with Clark. "From the time this investigation began, statements provided by the Sacramento Police Department have proven to be self-serving, untrustworthy, and unreliable," Crump said in the statement, adding results show Clark was "not a threat" to the officers who shot him."Beyond the fact that police at first said Stephon's cellphone was mistaken for a gun," Crump continued, "but then changed their story to say that they thought it was a crowbar, our autopsy has shown that he was shot repeatedly in the back — which is certainly not characteristic of someone menacing officers or preparing an imminent attack." Crump expects officials will try to "dispute" Omalu's findings, he said, like some researchers and NFL doctors attempted to do with his CTE research. "I'm sure the police will similarly try to discredit his findings about Stephon Clark," he said, "but once again the truth will win out."

'This is not a local matter'

The independent autopsy results were released by the family's attorneys and Omalu one day after Clark's funeral.During the service Thursday, the Rev. Al Sharpton vowed to press for justice as he delivered the eulogy for Clark at Bayside of South Sacramento Church."We will never let you forget the name of Stephon Clark until we get justice," Sharpton told mourners.The sanctuary overflowed with so many people that some sat outside as the funeral took place. 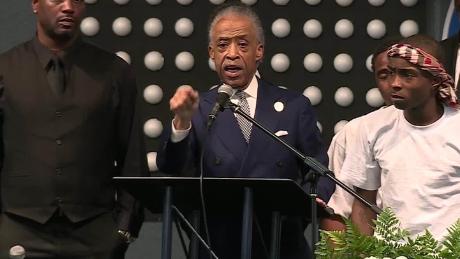 Sharpton spoke while being hugged by Clark's brother Stevante, who had just interrupted the service with an emotional plea to never forget his brother.In the eulogy, Sharpton disagreed with White House spokeswoman Sarah Sanders, who called Clark's shooting a "local matter" that should be left up to local authorities."No, this is not a local matter — they've been killing young black men all over the country," he said.Sharpton also pointed out that protests over Clark's death have been peaceful."They're not being violent. They're asking for you to stop being violent to them," Sharpton said. "They're not trying to hurt anybody. They're trying to express their pain."

Police released footage of Clark's shooting 72 hours after it happened as authorities are still gathering facts and conducting a thorough investigation.In the footage, someone can be heard telling officers to mute their body cameras. The comment comes about seven minutes after Clark was shot multiple times — and it has not sat well with the community. 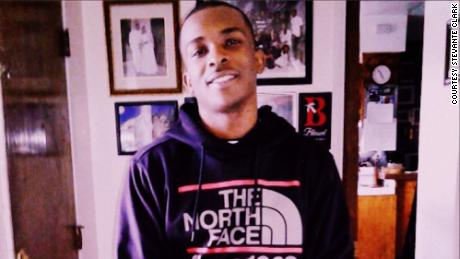 Sacramento Police Chief Daniel Hahn told CNN he doesn't know why the cameras were muted. Officers are allowed to do so in specific situations, like when they're talking to a confidential informant, he said."The bigger question, even beyond this specific case, is if we should allow people to mute their mics at all or under those circumstances," he said Tuesday. "We were already looking at that before this incident happened, but I think this incident is a perfect example of why that is problematic.""Any time there is muting on this camera, it builds suspicion — as it has in this case."Hahn announced this week that California Attorney General Xavier Becerra will hold an independent investigation into the incident.

CNN's Darran Simon and Dan Simon contributed to this report.