The protests came one day after a forensic pathologist retained by the family of Stephon Clark said police shot the 22-year-old eight times, including six wounds to his back. "It's more than color," Barnes told the crowd at the second of two rallies Saturday. "It comes down to wrong and right." Police had previously said officers fired 20 shots at Clark on the evening of March 18 after responding to a 911 call about a man who was breaking car windows. They pursued Clark into his grandmother's yard where, police said, he "turned and advanced toward the officers while holding an object." The officers said they believed Clark was holding a gun, but only a cellphone was found near his body, police said. At Saturday's rally, a Clark family friend, Jamilia Land, said Clark's brother Stevante is devastated by his brother's death."You don't know the damage inside. We are living in communities that look like war zones. You don't know what it is like to go to the home that you grew up in and hear … that your brother was murdered in his grandmother's backyard."On Tuesday night, Stevante Clark and a large group of demonstrators attended a Sacramento City Council meeting to protest the shooting death. Clark marched to the front of the room, jumped on top of the dais in front of stunned council members and the mayor and chanted his brother's name.As the crowd joined in, Stevante Clark coaxed them on. "Louder! Louder! Louder!" he yelled. The scene illustrated the anger of many in Sacramento, where the public outcry and protests continue to mount, including demonstrations outside NBA games. Barnes,who grew up in the Sacramento area and has 9-year-old twins sons, told the crowd he was starting a scholarship fund for Clark's two sons. He called on police officers to get to know the communities they're entrusted to serve. "We fear what we don't know," he said. "We don't know these cops, so we fear them. They don't know us, so they fear us. We need to get these cops in these communities walking, not driving … and meeting these people in the neighborhoods."Police released video of Clark's shooting 72 hours after it happened. In the footage, someone can be heard telling officers to mute their body cameras. The comment came about seven minutes after Clark was shot multiple times, and it has led to suspicions of a cover-up among some residents. 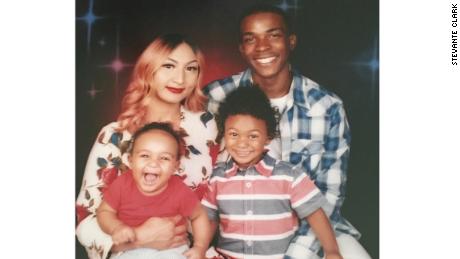 An autopsy conducted by the Sacramento County Coroner determined the cause of Clark's death as multiple gunshot wounds, and the manner of death was homicide, according to a preliminary report.An independent autopsy showed Clark was shot by Sacramento police eight times, with six of those wounds in his back, according to Dr. Bennet Omalu, the forensic pathologist who conducted the separate autopsy.Clark also received a gunshot wound to his side and another to his left thigh, Omalu said.Clark's death was "not instantaneous," Omalu told reporters, estimating the father of two died between three and 10 minutes after being shot."You could reasonably conclude that he received seven gunshot wounds from his back," Omalu said. Each of those bullets possessed "a fatal capacity," he said."Meaning that, out of all the seven, all he needed to have died was just one of the seven."Sacramento Police Chief Daniel Hahn announced this week that California Attorney General Xavier Becerra will hold an independent investigation of the shooting. Two officers — one of whom is black — have been placed on administrative leave amid a use-of-force investigation.