For the past week, they marched with agonizing blisters and slept on gymnasium floors on their way to demand more school funding and higher raises.Their journey culminated Tuesday afternoon when they finally reached the state Capitol. Exhausted but emboldened, some of the teachers gave speeches on the steps. Most state lawmakers had gone home for the day. But some from the Tulsa area met marchers outside. Rep. Meloyde Blancett said she would take them out for dinner.

After mile 94 of the march, Craig Hoxie stopped and reflected on why he made the trek. "We've reached a breaking point," said Hoxie, a 48-year-old science teacher at Booker T. Washington High School. "I would really like, for once in my career, if we didn't have to beg for parents to give Walmart gift cards."Flanked by dozens of other teachers and supporters, Hoxie embarked on the final 16-mile stretch of the walk Tuesday morning — with massive blisters on his feet. 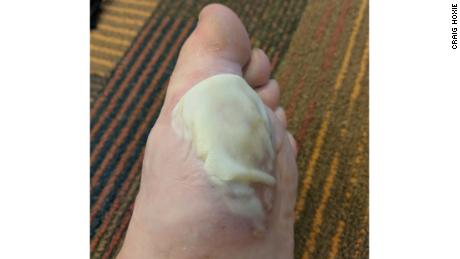 "My physical suffering is there. But three or four days from now, I'll be fine," he said. "The wounds that have been caused by the state legislature's neglect will take much longer to heal."Hoxie spoke with some of the lawmakers Tuesday, which left him feeling both energized and frustrated. He said while legislators from his district were receptive, others at the state Capitol seemed less so. "The hope was that our symbolic action would elicit a satisfactory response," he said. "So far it has not." Like thousands of teachers walking out across Oklahoma, these Tulsa educators aren't happy with the state's recent passage of a bill that gave some additional funding for education and raises. They say much more is needed to replace archaic textbooks, fund electives courses and give teachers enough of a raise that they won't have to work multiple jobs.Lawmakers have told CNN that no money can be added to the state budget, though teachers want $50 million more than has been allotted for next year."They've been telling us they can't do anything all along. So there is a disconnect between the possible and what they are saying," said Alicia Priest, the president of the Oklahoma Education Association. "The teachers that are here, the parents that are here, the community members that are outside in droves believe that it can be done."

The voyage started on a chilly morning last Wednesday, with teachers carrying a week's worth of gear in their backpacks.Over the next six days, they endured a thunderstorm, snow and even two earthquakes, said Heather Cody, a third-grade teacher who coordinated the march. "Everyone has soldiered on," she said. Even the Tulsa schools superintendent, Deborah Gist, marched alongside the teachers.Hoxie said hours of pounding the pavement led to many blisters. But the teachers didn't quit. As they got closer to the capital, the teachers marched to the song "We're Not Gonna Take It."

Along the way, the teachers encountered extreme acts of generosity. There was the law firm that bought 60 pizzas for the group. The sanitation company that set up portable toilets along a bleak part of the route. And the anonymous donor who saved the day when the teachers didn't have a place to stay. Shortly after they started their journey, Cody fretted about finding shelter for the teachers in Chandler, Oklahoma — where they were expected to arrive two days later. Then a stranger came to the rescue. "I get a phone call from someone who wanted to remain anonymous, who said: "I have $500. How would you like to spend that?' Cody said. "Then he called me back and said, 'Actually, double that. I have a friend who's going to match that. So make that $1,000."They spent the $1,000 on 14 rooms at an Econo Lodge in Chandler. "So we did to get to sleep one night in a bed," Hoxie fondly recalled.During their last night, doctors and massage therapists who heard about their journey and wanted to help showed up at Jones High School, where teachers slept in the library. Some of the greatest outpourings of support came in rural communities, where residents offered anything they had — food, water and words of encouragement."The communities we've gone through have just been incredible," Cody said. "This is a true example of why teachers stay in Oklahoma."She just hopes the sacrifices made by Tulsa teachers resonate with lawmakers. "We just walked 110 miles for our students," she said. "What are you willing to do for our students?"

CNN's Steve Almasy and Tristan Smith contributed to this report.