"We don't require that runners outline their gender identity history with us, so we can't say for certain how many trans runners are in our race. We do know that we have had several transgender runners in the past," said T.K. Skenderian, Director of Communications for the Boston Athletic Association, which organizes the annual race.In a blog post on her website, transgender marathon runner Amelia Gapin criticized the media for sensationalizing the story and overlooking the fact that Boston's policy was not new."Trans people usually don't make a big deal out of doing things. For the most part, we just live our lives as best as society allows us to. We do us. If you see something declared as a 'first' for transgender people, be very dubious," she wrote. But while transgender runners have been participating in the famous marathon for years, barriers to full inclusion in the sport still remain — and that's what advocates hope the recent wave of coverage will draw attention to. "Hopefully, one day we won't need these sports inclusion efforts to be broadcast in such a way," said Ashland Johnson, Public Education & Research Director of the Human Rights Campaign. "But the reality is, until more institutions in sports update their policies or change their inclusion image, we'll need to highlight and celebrate every sports inclusion effort."For years, fear and discrimination kept transgender athletes from openly participating in races, Johnson said. Part of it stemmed from debate over whether transgender women had a competitive edge due to their testosterone levels.Some of the debate has been settled for the time being by the sport's major governing bodies, who say that transgender athletes cannot be denied the chance to participate — as long as they meet certain criteria.

Hormones and the question of a competitive edge

USA Track and Field follows the International Olympic Committee's policy on transgender athletes.Those guidelines state that athletes assigned male at birth must stay below certain testosterone levels for at least 12 months before their first competition and throughout the period of eligibility to compete. Athletes must have "declared" that their gender is female for at least four years. Surgical anatomical changes are not a prerequisite for participation. Where awards or cash are not at stake, USATF's policy says it "encourages race directors and competitors to accept the entries at face value." When prizes are up for grabs, the Boston Athletic Association follows USATF's guidance, Skenderian said.The guidance is intended to ensure a level playing field, Johnson said. But it stems from the dubious assumption that men will always out-compete women when the science is not clear that testosterone alone gives runners a competitive edge, she said. "They're assuming an advantage based on one thing: testosterone. But we don't have enough evidence that that one trait makes you more competitive," she said. Testosterone builds muscle mass, which is one factor that affects speed, but it's not the only one, said pediatric endocrinologist Elyse Pine, who specializes in transgender medical care. Once transgender women start hormone treatment to increase estrogen, they lose any competitive advantage they may have had from testosterone, said Pine, Medical Director of the Gender Journeys of Youth Program at Chase Brexton Health Care in Maryland, which serves transgender and gender diverse youth. Besides, transgender people don't take hormones to improve their race outcomes — they're doing to improve their overall quality of life, she said."It's really due to a deep-seated need to transition for personal reasons," she said. "It's not like they're trying to get some competitive advantage in amateur competitions."Johnson said the sports world should have greater concerns than policing a small group of competitors, such as real doping and drug abuse among athletes regardless of their gender. 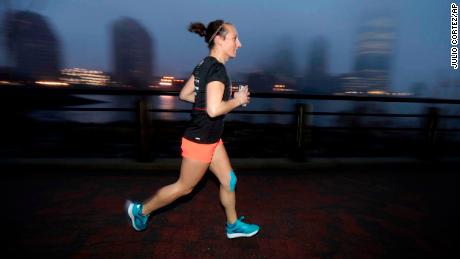 The Boston Athletic Association does not require registrants to provide medical documentation to prove their gender, Skenderian said. But the gender marker on their government-issued identification must match the one on their registration form, as well as the one used in their qualifying race. The documentation requirement can be a barrier for some transgender and gender nonconforming athletes, Gapin, the marathon runner, said.Some states require gender reassignment surgery to change genders. Massachusetts is not one of them, but many Boston Marathon runners come from beyond its borders. Other states require a minimum period on hormones, with at least one doctor's note to back it up — all of which takes time and money that may be hard to come by. Gapin, who lives in New Jersey and works as a software engineer, said she does not need to worry about documentation. But her gender became the focus of several news stories about Boston's policy."We keep living this hell of false firsts over and over because cisgender people continue to get off on a voyeurism of trans lives," Gapin wrote on her blog. "They treat it like a spectator sport. Something that happens all the time isn't very interesting, but a first makes for a story."She acknowledged that visibility is good for the community. But each positive reaction comes with an ugly, negative comment that seeks to deny their existence, she said."Neither this nor the weather will dampen my experience, but I think maybe people could just be a lot more compassionate."