Spurred by the recent efforts of teachers in West Virginia, Oklahoma and Kentucky, teachers in Arizona are walking out of their classrooms, while Colorado's teachers are rallying at their state Capitol.Dozens of school districts across both states were expected to be closed Thursday.

Arizona's public school teachers planned to walk out after weeks of voicing their dissatisfaction over pay and educational funding. It's the first teacher walkout in the state's history. Educators in 90 districts were expected to walk out Thursday, with between 30,000 and 50,000 teachers participating, according to the Arizona Educators United grassroots coalition. Though the governor weeks ago announced a proposal to raise teacher pay over the next three years, educators say it's not enough.Arizona Educators United wants a 20% raise for teachers by next school year and yearly raises after that until Arizona's teacher salaries reach the national average. The group also wants Arizona to restore education funding to 2008 levels, while Gov. Doug Ducey has offered to restore $371 million in cuts over five years. Ducey on Thursday reiterated his intention to secure 20% raises, saying in a statement that teachers must be "respected, and rewarded, for the work they do — and Arizona can do better on this front." 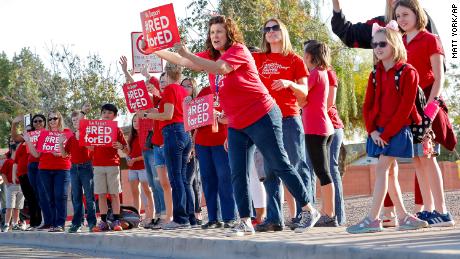 Ducey, a Republican, encouraged students' parents to call their lawmakers to ask them to vote "yes" on the proposal. His statement did not address educators' other demands. The Arizona American Federation of Teachers, or AFT, on Wednesday offered its own proposal, which it said would pay for school funding and teacher raises. The state branch of the national union called for a 2.5% statewide tax on certain now-untaxed services, such as haircuts and legal services, that would raise $2.65 billion each year, according to a news release. The money could be used to maintain school buildings, provide classroom supplies, fund kindergarten programs and provide salary increases to all school staff, the AFT said. "Our students, educators, parents and communities have been backed up against a wall for more than a decade," Arizona AFT President Ralph Quintana said in the statement.

In Colorado, crowds of educators and their allies — wearing red — converged Thursday on the Capitol steps. At least 25 school districts were closing Thursday or Friday, according to the Colorado Education Association. 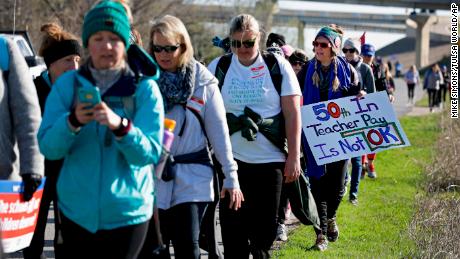 Some of those districts had teacher work days planned, but a majority of them were closing because educators had called in to take personal days, and districts were short on substitutes, CEA Vice President Amie Baca-Oehlert said. Sharon Roybal, a high school teacher in the Jefferson County School District, told CNN that she and her colleagues aren't given the resources to do their jobs efficiently. "We are a high school of over 2,100 students," she said. "We have two copiers. One is broke as we speak." "We have a staff of 85 teachers. We are waiting in line to make copies," Roybal said. 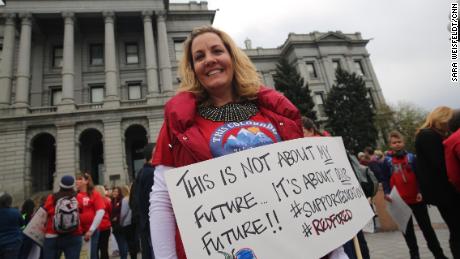 State budget writers have set aside $100 million for education funding, but teachers say they need more, The Denver Post reported.The state has not kept up with a constitutional mandate to increase school funding each year by at least the rate of inflation, the CEA says. But raising taxes to pay for that is difficult because the state's 1992 taxpayer bill of rights requires that voters approve any tax hikes. Colorado's average teacher salary ranks 31st in the country, according to the National Education Association. The group says low pay and funding means working in Colorado's schools is less attractive to college graduates and prompts teachers to leave the profession early, leading to a shortage of qualified teachers.

CNN's Scott McLean and Sara Weisfeldt contributed to this report.