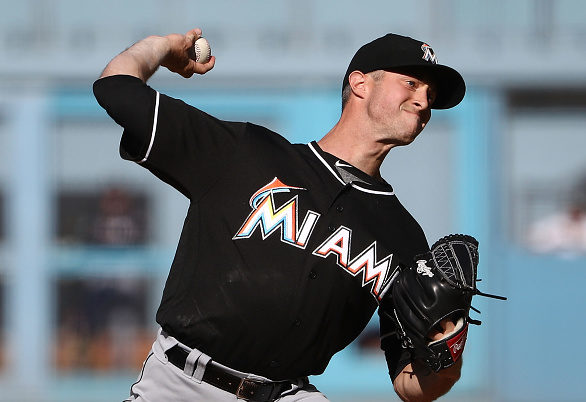 Marlins pitcher Trevor Richards, a former substitute teacher and a brewery employee, took the mound Wednesday for his fifth career start and it was a gem. The Marlins pulled off an 8-6 victory but he walked away with a no-decision.

Richards, 24, struck out ten batters and only allowed one hit in 4 and 2/3 innings to the reigning NL Pennant winning Los Angeles Dodgers. His ten strikeouts doubled his previous career high of five.

Have a look for yourself. pic.twitter.com/xMVTjPGGd5

After the game, he said, “I just focused on keeping the ball down and attacking the zone early, throwing strikes and looking ahead. We were just, fastball-changeups a lot. Trying to keep them off-balance.”

Richards went up agains three-time Cy Young Award winner Clayton Kershaw and more than held his own. Kershaw gave up three runs on five hits in five innings of work.

Trevor Richards went undrafted after playing for Drury University. He spent the past winter as a substitute teacher in Illinois. Richards also spent time working at MillerCoors in Milwaukee.

In a year, Miami Marlins pitcher Trevor Richards went from working at @MillerCoors Brewery to pitching at Miller Park: https://t.co/417DtDq6nOpic.twitter.com/GnT0jtD1Bv

On the year, he is 0-2 with an earned run average of 4.94. This was his second scoreless outing, having pitched seven innings in a 1-0 loss to the Pittsburgh Pirates earlier this month.

The Miami Marlins, 7-17, are currently undergoing a massive rebuild after trading away all of their big names such as Marcell Ozuna, Giancarlo Stanton and Christian Yelich.