The Russian Commission for State Sovereignty Protection has found that Western nations already sought to oust Vladimir Putin from power in 2011, long before the beginning of the ongoing political crisis.

“People in Washington and other capitals understood very well that in accordance with the Russian Constitution and tradition, the main battle for control over Russia always takes place in the period when the leader of our state is being elected. Moreover, starting at least from 2011, they have put before themselves the concrete task of preventing Vladimir Vladimirovich Putin himself from assuming the presidential post,” the head of the commission, Senator Andrey Klimov, was quoted as saying by TASS at a recent session of the State Duma Foreign Affairs Committee.

“This means that attempts to influence the will of the majority of Russian citizens to keep Vladimir Putin the head of the state were made well before the international political crisis of 2014, Donald Trumps election as president of the United States, and making Russia an official enemy of the collective West in a US federal law.”

The senator said that political opponents of the Russian Federation chose the 2018 presidential election as the best time to begin implementing strategies to change not only the principles of Russias domestic and foreign policies, but also the structure and membership of its state institutions.

Klimov also stated that no serious Western analyst or think tank believed that Putin would choose to not run for a new term in 2018, or that he would lose. “Their main plan was slated for the future, the preparation for and holding of the next parliamentary election in 2021, and presidential election in 2024,” he said. 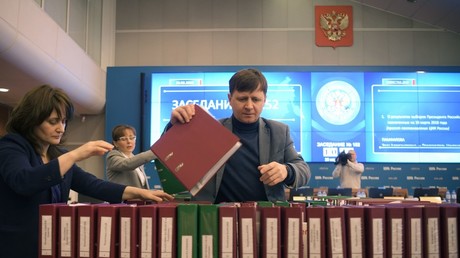 The Upper House Commission for the Protection of State Sovereignty is expected to present its major report on foreign meddling in domestic Russian politics before the end of the month. Earlier, the authors of the paper said they had registered over 1,000 incidents of meddling just through registered media outlets, most of which are American. In addition, non-governmental and non-profit organizations with foreign funding also attempted to influence the election despite restrictions and bans imposed on these foreign agent groups.

Last week, MPs from the parliamentary majority party United Russia said they had prepared a bill that would list as “undesirable” all foreign and international groups that attempt to influence Russian elections, effectively banning their activities.