Lingering doubts in Europe over whether glyphosate, the worlds most ubiquitous herbicide, causes cancer in humans are in no small part due to the efforts of one man: Christopher Portier.

Since 2015, food safety agencies across the globe from the Environmental Protection Agency in the U.S. to the Australian Pesticides Authority have concluded that glyphosate — whose license for use in the EU was narrowly approved last year — does not cause cancer in humans.

Theres one exception: The World Health Organizations International Agency for Research on Cancer (IARC) is the one international body not to agree by classifying it as a “probable” carcinogen.

Portier, a semi-retired carcinogenicity expert, was an invited specialist used by an IARC working group in its 2015 assessment. He has since embarked on a multifaceted campaign to tell the world to discount the broad consensus about glyphosate and instead have faith in the WHOs cancer agency based in Lyon, France.

Portier, 62, is no rookie. He is armed with more than 30 years of research experience in the U.S. federal government, including a role as a division chief of the U.S. Centers for Disease Control and Prevention. He has a Ph.D. in biostatistics from the University of North Carolina and used his expertise to undermine a 2015 opinion from the European Food Safety Authority (EFSA) stating that glyphosate is unlikely to cause cancer in humans. 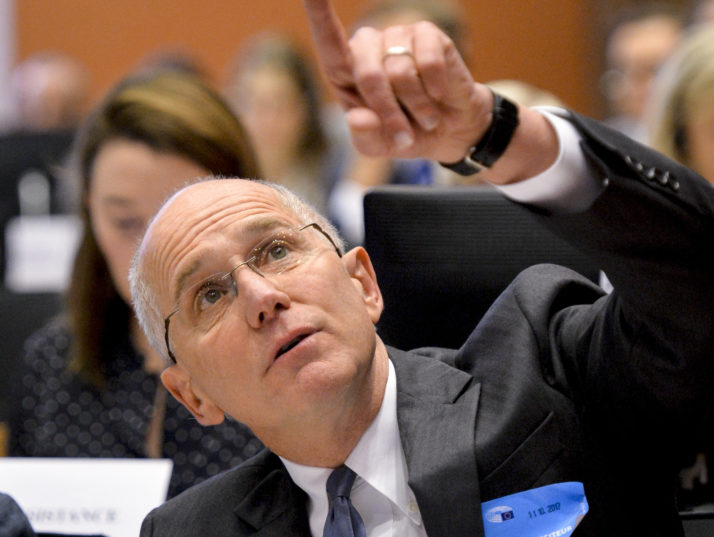 Along the way, hes challenged the findings of Germanys top food safety regulator — another agency that gave a green light to glyphosates safety — and received around $160,000 from attorneys seeking expert advice in a case suing Monsanto, the worlds largest single manufacturer of glyphosate, on behalf of rural dwellers who allege the herbicide causes cancer. Last year, he spurred a well-oiled lobbying campaign aimed at Jean-Claude Juncker, the president of the European Commission, and other senior commissioners to revoke glyphosates license in the EU.

The thrust behind his critique is that world food safety agencies fail to carry out any independent scientific studies themselves and instead rely heavily on experiments paid for by the pesticide industry.

“Agencies need to write their own reviews and not rely upon reviews written by industry,” Portier, a balding man with a calm, even voice, said during a hearing in the European Parliament last month when evaluating the quality of EFSAs assessment on glyphosate. “As Ive pointed out to all of my students over the years, he who writes the first draft sets the tone of the paper. Allowing industry to write their own reviews is certainly likely to bias the evaluation.”

Email correspondences from Portier, an American citizen, and senior officials in EFSA obtained by POLITICO show how deep-rooted the standoff between the two global agencies has become even as Europe makes efforts to align how IARC and EFSA communicate their findings to the public.

Between November 2015, when EFSA updated its risk assessment of glyphosate, and June 2016, EFSA Executive Director Bernhard Url battled with how to contain a growing public relations debacle stemming from Portiers campaign to place doubt on Europes findings on glyphosate, the emails show. As an invited specialist who played an integral role in IARCs statistical analysis of glyphosate, the emails shows that Portier took it upon himself to engage in a “counteroffensive policy” — as it was described by one IARC scientist — to deflect any reputational damage to IARCs review by criticizing both Germanys Federal Institute for Risk Assessment and EFSAs assessments of glyphosate.

The war of words over glyphosates carcinogenicity led to claims from environmental groups that EFSA had copied and pasted huge chunks of scientific literature paid for by Monsanto into its own scientific assessment.

In a November 9, 2015, email to Consolato Maria Sergi, an IARC scientist, Portier said EFSAs review would create two problems. First, it would weaken the strength of IARCs assessment, and second suggest IARC did not do its job properly.

“I do not intend to let this happen,” Portier wrote, explaining that he would draft an open letter to the European Commission raising deep concerns about EFSAs decision. “I would like as many members of the Working Group to be co-authors of this as possible,” he wrote.

Portiers email generated support from several key supporters of IARCs work, including Hans Kromhout, a professor at Utrecht University, and Philippe Grandjean, an adjunct professor at the Harvard School of Public Health. In an email to Portier on November 11, Grandjean called Portiers campaign an “important initiative” and raised questions about EFSAs independence when assessing glyphosate.

“I was on one of EFSAs panels for six years and had to resign because I did not like the culture … Although each opinion has a section on uncertainties, only lip service is paid to this issue and basically in the absence of solid evidence, the substance is innocuous,” Grandjean wrote. “The glyphosate controversy is not the first sign that EFSA has serious bias problems.”

Asked about EFSAs independence or any specifics related to how to assess glyphosate, Grandjean declined to comment. “Im fully aware of the critique, and I share much of it, but I believe that working with EFSA can be productive and should not be compromised,” he wrote in an email.

A spokesperson for EFSA rejected claims of bias inside the institution, underlining that all decisions are reached by consensus, with individual experts being allowed “to express minority opinions should they disagree with the view of their peers.”

Manolis Kogevinas, a professor at the Centre for Research in Environmental Epidemiology, also replied to Portier, stating in an email that “EFSA obviously has less experience in these types of evaluations” than IARC.

Portier, meanwhile, has been accused of having a conflict of interest at the time he sought the signature of scientists on his letter to the Commission.

In the end, Portiers efforts culminated in a letter signed by 96 scientists to European Health Commissioner Vytenis Andriukaitis, expressing “deep concern” over EFSAs assessment on glyphosate. The letter stated that IARCs decision is “by far the more credible.”

Portiers battle with EFSA and his insistence that regulators in both Parma — where EFSA is based — and Berlin failed to consider eight studies linking increased numbers of tumors to animals exposed to glyphosate, are part of a growing list of recent incidents that have placed doubt on EFSAs findings.

Last year, the war of words over glyphosates carcinogenicity led to claims from environmental groups that EFSA had copied and pasted huge chunks of scientific literature paid for by Monsanto into its own scientific assessment. EFSA played down the allegation, arguing that the language in question was peer-reviewed.

IARC was also at the heart of several investigations — including a report in POLITICO — into claims that it had seen unpublished but acclaimed research finding no evidence of a link between glyphosate and cancer but chose not to include the findings in its review.

Confronted with a spiraling war of words over which agency does the more reliable work, EFSAs Url decided to weigh in. On June 7, 2016, the EFSA chief wrote to Christopher Wild, IARCs director, expressing a need to defuse the situation. He also made his disappointment known that officials from both IARC and EFSA had failed to hold meetings on February 17 to iron out their differences.

“With this in mind — and given the high level of public concern about glyphosate — I strongly believe that there is value in going ahead with the planned meeting between EFSA and IARC,” he wrote. “I also believe that a face-to-face meeting is the best way to address any remaining misunderstandings between our two organizations, which inevitably are difficult to avoid through written communication alone.”

The meeting never took place, despite several attempts from EFSA. IARCs Wild wrote to Url on February 5 explaining that his institution would not meet with EFSA unless it deleted certain statements in its assessment of glyphosate such as one claiming that “EFSA assessed more evidence including additional key studies that were not considered by IARC.”

Portier, meanwhile, has been accused of having a conflict of interest at the time he sought the signature of scientists on his letter to the Commission.Lawyers from Monsanto have challenged Portier being used as a specialist in an ongoing court case between cancer patients and the pesticide maker, going after him for accepting roughly $160,000 in payments from the plaintiffs lawyers while he was holding discussions with regulatory agencies in both the U.S. and Europe about glyphosate.

Asked about his decision to publicly question EFSAs scientific standards, Portier stood by his actions and urged EFSA to convene with scientists from IARC so that their methodologies on how to evaluate scientific data can be aligned.

Portier and those who paid him note that all of Portiers work conducted with IARC concluded before his services were retained by plaintiffs.

“Portier had already arrived at the conclusion of the probable carcinogenicity by the time he became an expert for us,” said Michael Baum, an attorney at Baum Hedlund Aristei & Goldman, which represents plaintiffs in the case. “His expert report and opinions confirm and reiterate what he had already concluded before we retained him.”

“Hes worked for decades inside federal agencies, so its not like hes some sort of left-wing liberal. We are not very environmentally progressive in the U.S. and yet he has consistently said the same things time and time again about glyphosate,” added Robin Greenwald, an attorney at Weitz & Luxenberg, who is representing cancer patients in lawsuits against Monsanto in Missouri. “Chris has been consistent throughout with all of his various statements … He probably knows his stuff better than anyone.”

Graeme Taylor, a senior lobbyist with the European Crop Protection Association, which represents the interests of companies such as Monsanto and Syngenta, however, said that “efforts to undermine confidence in the European system benefit no one.” “There were significant concerns over the IARC assessment of which Portier was part, not to mention the conflicts of interest he acknowledged,” he added.

IARC declined to comment on the role played by Portiers in supporting IARCs work and placing doubt on the quality of EFSAs assessment.

But asked about his decision to publicly question EFSAs scientific standards, Portier stood by his actions and urged EFSA to convene with scientists from IARC so that their methodologies on how to evaluate scientific data can be aligned.

“I would not do anything differently. EFSA has scientific shortfalls and flaws in the evaluation of glyphosate and they have yet to fix those scientific flaws,” Portier said in a phone interview. “If you want to align the two agencies there needs to be a scientific meeting on how to evaluate the data and the references behind it. EFSA did not even find instances of tumors because they did not re-analyze the data themselves.”

Portier said that IARCs evaluation of data, particularly in the field of epidemiology, was far superior to that of EFSA, which was part of the reason IARC came out with its opinion that glyphosate “probably causes cancer in humans.”

An EFSA spokesperson questioned Portiers partiality on the glyphosate issue at the time when he drafted the letter signed by 96 scientists and criticized EFSA.

“EFSA respects the right of any individual to express his or her personal views regarding its scientific conclusions,” the spokesperson said. “We also believe that for the sake of transparency any relevant interest should be declared when expressing a view or initiating a campaign, something that Professor Portier admittedly failed to do when signing this letter.”

Read this next: Trump rips into Germany at NATO chief breakfast