The Russian Interior Ministry has prepared a bill that expands the presidents powers in granting citizenship to foreigners and simplifies naturalization for ethnic Russians living in foreign countries, Izvestia reports.

On Tuesday, Izvestia reported that it has seen the draft bill prepared by the interior ministry and already approved by the government commission for legislative work.

The document simplifies the naturalization procedure for certain groups of candidates defined by the Russian president. These people would be able to obtain Russian citizenship without passing the obligatory Russian language exam, legally residing within Russia for five years, and proving that they have sufficient income to provide for themselves.

The newspaper says the main goal of the bills sponsors was to simplify naturalization for ethnic Russians in countries with complex political situations, civil unrest or violent regime change. According to a 2010 census, there are over 143 million ethnic Russians living in the world and about 30 million of them are citizens of foreign countries, primarily former republics of the Soviet Union. Ukraine ranks first in number of ethnic Russian residents with about 8 million, followed by Kazakhstan with 3 million.

Another proposal concerns foreign citizens of Russian ethnicity who want to become naturalized in the Russian Federation. The bill would allow them to apply for citizenship in the region of their choice. Currently, they can only become naturalized in the region that granted them temporary registration. The sponsors explained that this would be especially beneficial for ethnic Russians from Ukraine who started moving to Russia “urgently and in mass numbers” after the 2014 Maidan coup in Kiev resulted in the democratically elected president of Ukraine being overthrown.

The bill has already received approval from the justice ministry, the presidential administration, the labor ministry, the Federal Security Service, and the ministry of foreign affairs, as well as the government commission for legislative work. 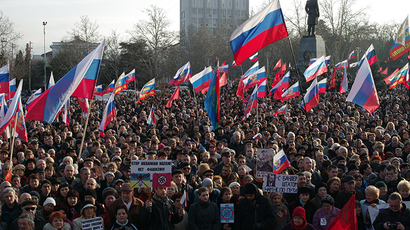 The Russian Public Chamber has also supported the bill, the head of the chambers commission for popular diplomacy and humanitarian cooperation, Yelena Sutormina, told Izvestia. She added that the new conditions could result in a sort of “immigration amnesty” for ethnic Russian refugees from Ukraine and give major impetus to the state program of resettling ethnic Russians from foreign nations.

This program was launched in 2014 when President Vladimir Putin signed into law simpler and faster rules for granting citizenship to people who speak Russian, and have at least one ancestor who was a permanent resident of any state within the borders of the current Russian Federation.

Apart from the citizenship fast track, people who comply with the new conditions have less stringent conditions for entering Russia or extending their temporary residence permit.

Most of the candidates would have to renounce their foreign citizenship to become Russians under the new procedure. Exceptions are made when doing this would be legally impossible. The program can also be applied to people without citizenship, which is the case for many ethnic Russians who live in the Baltic states but cannot obtain citizenship and live under non-citizen status.