Senator Igor Morozov says Russia must lead a dollar-dumping trend in response to the latest sanctions threat, as the move would bring disaster to the debt-ridden US economy and would be a good reply to Washingtons policies.

Russian Senator Igor Morozov has urged his country and its allies to stop using the US dollar for mutual payments, adding that the move would bring disaster to the debt-ridden US economy and would be a good reply to Washingtons sanctions policy.

“Of course we must respond [to the latest State Department statement on sanctions against Russia] and the first step must be us together with our partners in a number of economic and integrational blocs stop using the US dollar and switch to national currencies. This is what we were talking about at the latest BRICS summit. This will be a reply not just from us, but from the whole international community that has wars started against it,” Morozov was quoted as saying by Gazeta.ru news site.

“For Americans with their $21 trillion debt this can become a real disaster in the foreseeable future. This is why Washingtons reaction was so harsh and took the form of a new sanctions wave,” he said.

The senator said the US threats and unfriendly actions should not stop members of the international community who seek independence.

“All countries that put national sovereignty into the foundation of their foreign policy should apply maximum effort to switch to payments in national currencies. A single country cannot create such conditions only for itself – a conglomerate is needed for this. And Russia is a major driver of such processes,” he said.

Morozov believes the US pressure on Russia was caused, at least in part, by recent agreements between Russian and China and Iran, which call for switching to their national currencies in mutual payments. He called such moves “the most powerful irritant for the USA.” He also said the US State Department invented reasons for the sanctions in its statement. “If the Skripal case did not exist they would find some other excuse, create yet another myth.” 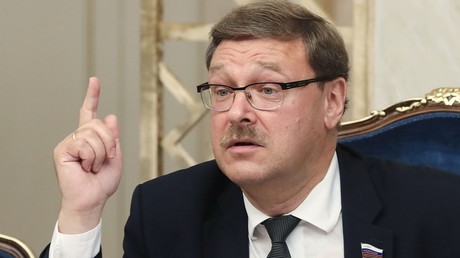 In further comments with REN-TV, Morozov added that dumping the dollar should not automatically translate into refusal to purchase and use various goods and services offered by US companies.

The senators comment came soon after the US State Department announced the two-stage plan to impose restrictions on Russia over its alleged role in the poisoning of a former double agent and three other people in the UK. The first stage of restrictions, which includes a ban on supplying Russia with US-made goods that can be used in the defense industry, is expected to come into force on August 22. The second round of sanctions, which includes downgrading diplomatic relations, banning the Russian airline Aeroflot from flying to the US and cutting off nearly all exports and imports, will reportedly be imposed three months after the first, unless the Russian authorities provide “reliable assurances” that they wont use chemical weapons in the future and agree to “on-site inspections” by independent monitors.