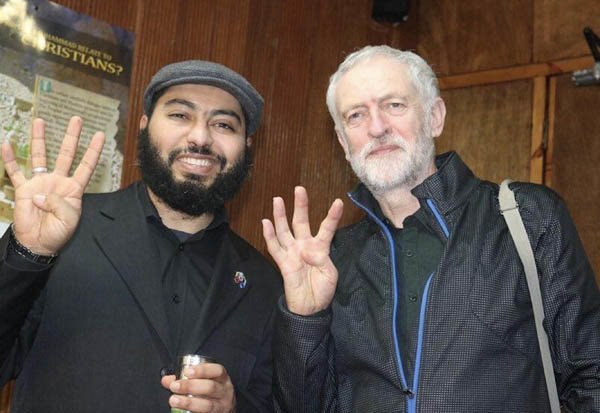 The Labour leader, currently battling claims of anti-Semitism, is pictured making the four-fingered Rabbiah sign linked to the Muslim Brotherhood.

The group, accused of engaging in terror acts across the Middle East and Russia, has been described in a government report as “counter to British values and democracy”.

The picture is believed to have been taken in 2016, after he became Labour leader, during a visit to Finsbury Park Mosque in his Islington North constituency.

Maajid Nawaz, an ex-member of Islamist group Hizb ut-Tahrir, described the Brotherhood as “to Muslims what the BNP is to the English”.

“The four-fingered gesture is a well-known symbol of solidarity with the victims of the 2013 Rabaa massacre in Cairo.”

A spokesman for the Labour leader said: “The four-fingered gesture is a well-known symbol of solidarity with the victims of the 2013 Rabaa massacre in Cairo.”

The Labour leader has also said he was present when wreaths were laid in 2014 to the victims of a 1992 attack in Paris but did not think he was “actually involved in it”.

Israeli PM Benjamin Netanyahu has accused him of honouring a founder of the Black September terror group which carried out the 1972 Munich Olympics massacre, who died in a French incident.