The Russian Commissioner for Human Rights, Tatyana Moskalkova, has said that Russia and Ukraine must sign a separate treaty or make some changes in their laws that would allow mutual exchange of prisoners between the two nations.

Speaking at the All-Russian Congress of Monitors on Friday, Moskalkova said that Russia and Ukraine should find a solution to the current problem which has arisen because the Ukrainian Constitution explicitly forbids the handover of convicted citizens to other nations, while the Russian Constitution bans the handover of Russian citizens to foreign states regardless of their procedural status.

“This means that we should find some mechanisms that would solve the whole complex of problems, probably through the institute of pardon or through a special treaty between Russia and Ukraine regulating the legal status of persons who hold citizenship of both countries,” Moskalkova said.

The official noted that such agreement could make it easier for consular workers to visit suspects and convicts and also could allow people with two citizenships to renounce one of them after facing criminal charges.

The comment came soon after mass media reported that a number of Russians, sentenced to prison terms in Ukraine over alleged participation in “terrorist activities”, made a request to Kiev authorities to be exchanged for Ukrainian citizens convicted and sentenced in Russia.

First deputy speaker of the Ukrainian parliament, Irina Gerashchenko, announced that Ukrainian President Petro Poroshenko was ready to pardon Russian prisoners so that they could be exchanged for Ukrainian citizens convicted and sentenced in Russia on charges of terrorism and extremism. 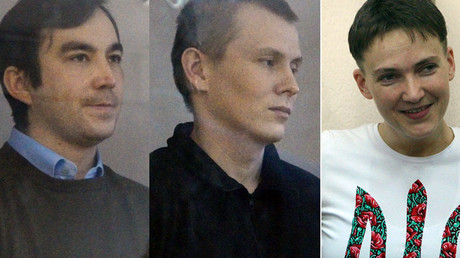 At least one of the convicts mentioned by Ukraine as possible participants in a future exchange, Oleg Sentsov, has Ukrainian and Russian citizenship. The same applies to Kirill Vyshinsky, head of the Kiev office of Russian news agency RIA Novosti, who is now on trial in Ukraine on charges of high treason.

The last prisoner swap between Russia and Ukraine took place in mid-2015. It involved the Ukrainian citizen Nadezhda Savchenko, who was sentenced to 22 years in jail in Russia for her part in the killing of two Russian journalists, and two Russian citizens – Evgeny Erofeev and Aleksandr Aleksandrov – who were serving 14-year sentences in Ukraine for their alleged “terrorism activities” and “waging an aggressive war.”

The exchange was arranged as part of an official handover of prisoners, but none of those involved held citizenship of two countries.