EU negotiators reportedly told diplomats last night that a divorce deal between Britain and Brussels has almost been agreed upon.

The EU on Thursday suggested progress had been made on the Irish border issue based on proposals put forward by Theresa Mays government.

Agreement on the Irish border conundrum – a major sticking point for both sides thus far – could give Prime Minister Theresa May a boost as she seeks to deliver Brexit on the terms of her so-called Chequers plan.

Mrs May has rejected the EU's proposal for a "backstop" to ensure there is no return to a hard border between Northern Ireland and the Republic after Brexit, arguing that it would effectively impose a border between the North and the rest of the UK.

But Reuters Bureau Chief in London, Guy Faulconbridge, has this morning claimed that EU and British negotiators have almost reached an agreement, citing Brussels sources. 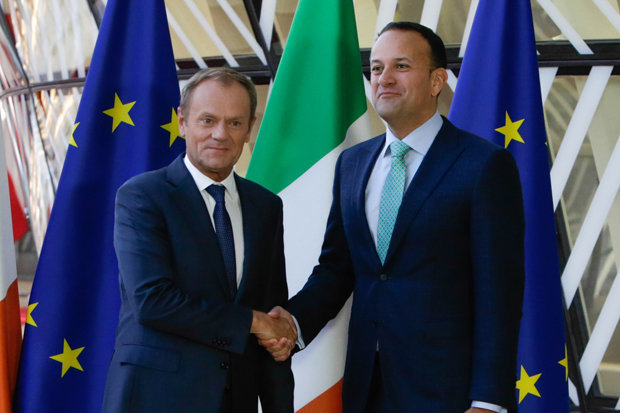 In a tweet, he wrote: “The European Union's Brexit negotiators told national diplomats in Brussels late on Thursday that a divorce deal with Britain was 'very close', according to two sources present at the meeting.”

Irish Prime Minister Leo Varadkar met with EU president Donald Tusk and chief Brexit negotiator Michel Barnier in Brussels on Thursday to discuss how to avoid checks at the border between Northern Ireland and Ireland post-Brexit.

If talks break down and no deal is reached, Varadkar stressed the importance of having a contingency plan in place, known as the “backstop”.

SUMMIT: Varadkar and Tusk talk to the media after a bilateral meeting in Brussels
(Pic: GETTY)

“I am very keen to see an agreement concluded”

“What I do know is that we need a backstop, a protocol on Ireland and Northern Ireland as part of a withdrawal agreement,” he said.

However, he suggested that there was “a good opportunity to clinch a deal over the next couple of weeks” in the final phase of the negotiations before Britain leaves the EU in March, 2019.

"I want to very much agree with Donald Tusk in his call for us to get down to business," he added.
"I am very keen to see an agreement concluded by November if at all possible – that is the interests of Ireland, the EU and the UK."

Dublin's Europe Minister, Helen McEntee, said she was confident a deal could be done but that the negotiations were reaching a "critical point".

With EU leaders set to meet again later this month in Brussels to review progress in the negotiations, McEntee said they needed to see Mrs May's promised alternative as soon as possible.

"I do believe that we can reach an agreement. I am confident given the fact that we have done a huge amount of work on the withdrawal agreement – it is about 90% complete," she told BBC Radio 4's Today programme.

"We have agreed in principle a transition period. I do think there is a lot of common ground in terms of the future relationship moving forward, so we are really now at the critical point.

"I think in the next 10 days if there is a proposal, obviously on its own it won't resolve the border issue, but certainty if something is legally sound and workable, I do believe that the [EU's] taskforce will work with Prime Minister May."

DRESSED DOWN: Mrs May was humiliated at the EU summit in Salzburg, Austria in September
(Pic: GETTY)

Tusk said a Canada-style trade deal was still on the table for Britain calling for both sides to "get down to business" following the Conservative party conference.

Tusk and Barnier have said the next EU summit on October 18-19 will be the "moment of truth" when it should be become clear whether it is possible for the two sides to reach an agreement.

He said: "Let me make this clear: the EU wants a relationship with the UK that is as close and special as possible.

"From the very beginning, the EU offer has been not just a Canada deal, but a Canada+++ deal.

"Much further-reaching on trade, on internal security and on foreign policy cooperation.

"This is a true measure of respect. And this offer remains in place."