The Ministry of Housing, Communities and Local Government is offering up to £50,000 to three “resilience advisors” who will “prepare for, and respond to, and recover from civil emergencies”.

The jobs are advertised as nine-month temporary roles but could be made permanent.

The advert reads: “The posts would suit those who are keen to understand how government works and to be part of new and developing areas of resilience policy.”

“The police are planning for all scenarios that may require a police response in the event of a no-deal Brexit.”

The UK will be leaving the EU in March 2019 – with Prime Minister Theresa May still trying to thrash out a deal with Brussels that she can also sell to MPs.

Documents prepared by the National Police Co-Ordination Centre (NPoCC) reveal the “real possibility” of calling in the army to tackle post-Brexit unrest.

Home Secretary Sajid Javid shrugged off the report saying he is “glad” police are taking into account all possibilities.

Rising prices of food and goods will “feed civil disorder” – along with a shortage of medical supplies. 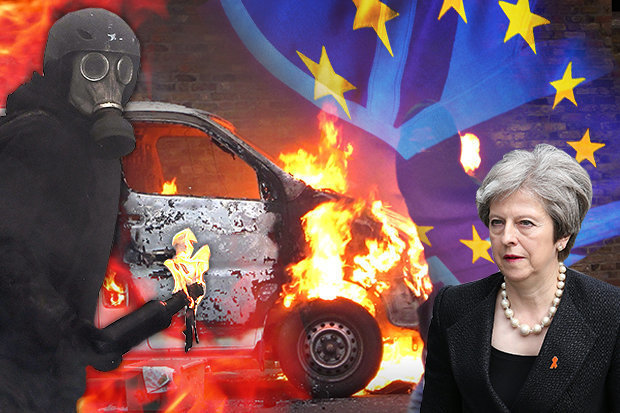 Fears of restricted supply has raised concerns of "widespread protest which could then escalate into disorder".

Police bosses also warned of a rise in crime such as theft as people try to get through a no-deal Brexit.

NPCC lead for operations Chief Constable Charlie Hall said: "The police are planning for all scenarios that may require a police response in the event of a no-deal Brexit.

"At this stage, we have no intelligence to suggest there will be an increase in crime or disorder.

"However, we remain vigilant and will continue to assess any threats and develop plans accordingly."