Tory MPs furious with the Prime Ministers handling of Brexit and lack of political vision have reportedly told colleagues they have written letters of no-confidence in her leadership.

The PM has faced savage criticism and ominous threats to her leadership by both Remain and Leave-supporting MPs over her approach to Brexit negotiations.

She will attend a meeting of the influential 1922 Committee of backbench MPs on Wednesday night in a last-ditch attempt to shore up her leadership.

Mrs May was warned to “bring her own noose” to the meeting in the event she fails to convince MPs she can deliver Brexit on terms agreeable to her fractured party.

FEELING BLUE: Theresa May is facing a backlash from Tory backbenchers (Pic: GETTY) 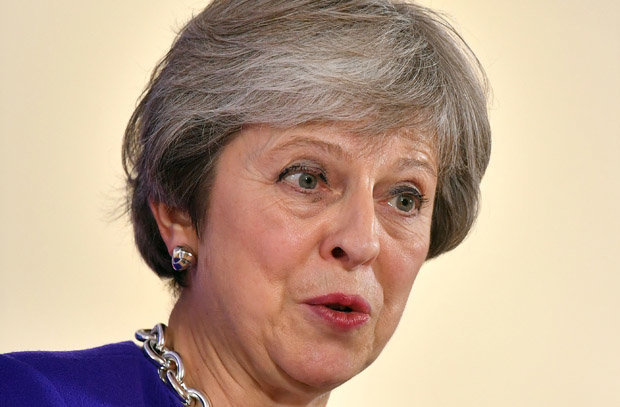 ON THE BRINK: At least four MPs have reportedly submitted letters of no-confidence this week (Pic: GETTY)

At least 48 Tory MPs must submit letters of no-confidence to Sir Graham Brady, chairman of the 1922 Committee, for a vote challenging the PMs leadership to be triggered.

Sir Graham, MP for Altrincham and Sale West, keeps track of how many letters have been submitted, but it is a closely-guarded secret.

Government sources believe she will inevitably face a no confidence vote at some point during the next few weeks, possibly before she can strike a deal with the EU, according to Buzzfeed News.

The website reported at least four letters of no confidence have been submitted this week, including two Leavers and two Remainers.

“Shes destroying the party I love”

One Remain MP told friends that Mrs Mays Chequers deal – which involves keeping Britain aligned with the EU on goods – is the “worst of both worlds”, BuzzFeed News reported.

In a tweet BBC political editor Laura Kuenssberg played down the prospect of a no confidence vote, writing: “48 letter threshold has NOT been reached yet Im told – for now.”

On MP told BuzzFeed News they were more “worried about the state of the Conservative party” under Mrs Mays leadership than Brexit.

They added: “Where are our domestic policies? What happened to compassionate conservatism? Since Theresa came to power what can we say shes done that would encourage people to vote Tory? I cant think of anything. She has no ideas. If it wasnt for Corbyn shed be out by now. Its not good enough. Shes destroying the party I love.”

DISCUSSION: Theresa May and Donald Tusk talking at the ASEM summit at the European Council (Pic: GETTY)

The scale of opposition her Brexit plans face was made clear as the Stand Up 4 Brexit campaign, which has received high-profile support from former foreign secretary Boris Johnson, said Sir Edward Leigh had become its 50th backer.

The PM used a statement in the House of Commons on Monday to assure MPs that the “vast majority” of the withdrawal agreement has been completed following her meeting with EU leaders in Brussels last week.

She argued that, despite the deadlock over the issue of the Irish border, “95% of the withdrawal agreement and its protocols are now settled”.

But MPs of all political persuasions have rounded on Mrs May over her handling of Brexit, with many unwilling to accept her suggestions of extending the transition period.