Hammond announced a £100billion spree of spending commitments in a budget he promised would help ease the financal pain of “hard working families” and “strivers” after eight years of austerity.

"The era of austerity is finally coming to an end,” he told MPs in the House of Commons.

An extra £1.7billion for universal credit welfare reforms, a £2billion cash injection for mental health services and £1 billion for defence were among the eye-watering spending pledges.

In an headline-grabbing announcement, Hammond said raising the income tax threshold to £12,500 would amount to a tax cut for 32 million people, putting £130-a-year in workers pocket from next year.

Hammond brought joy to drinkers across the UK by freezing duty on beer, cider and spirits for another year, but punished smokers by increasing tobacco tax in line with inflation plus 2%.

With Brexit just five months away, Hammond announced an extra £500 million for preparations for the UK's departure from the EU in March 2019.

To fund these spending pledges, Hammond unveiled a series of eye-catching levies, including a new digital services tax on the revenues of large tech firms he hopes will raise £400million-a-year from 2020. 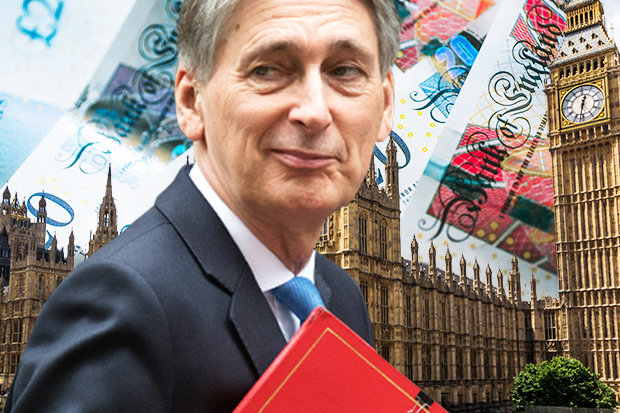 He said: "I present a budget for Britain's future that shows the perseverance of the British people finally paying off.

"For hard-working families, people who get up early every morning to drop their kids off at school.
"The strivers, the grafters and the carers who are the backbone of our economy."

“The perseverance of the British people finally paying off”

He said the “tough decisions” of the past eight years were “not driven by ideology”, rather, they were a “necessity” due to the “failure” of the Labour Party.

Hammond said: “That was our inheritance. We did what needed to be done.”

He told MPs: "Whatever the chancellor claims today, austerity is not over."</span>

He added: "What we've heard today are half measures and quick fixes while austerity grinds on.

"And far from people's hard work and sacrifices having paid off, as the chancellor claims, this government has frittered it away in ideological tax cuts to the richest in our society."

While most of his budget involved loosening the purse strings, Hammond announced the new tax on tech giants to make sure they "pay their fair share towards supporting our public services".

He added that the levy would not be online-sales tax on goods ordered over the internet as "such a tax would fall on consumers of those goods – and that is not our intention".

In a light-hearted speech peppered with jokes, Hammond said he was "looking forward to a call" from Nick Clegg, who was recently appointed head of communications at Facebook.

With regards to Brexit, Hammond he was "confident" there will be a deal, suggesting it would bring a "double dividend" from economic growth.

But with a deal hanging in the balance, he hinted that an emergency budget could take place in the Spring "if the economic or fiscal outlook changes materially in-year".

The chancellor, boosted by improved public finance forecasts, promised a "brighter future" after years of constraint imposed following the financial crash in 2008.

In Hammond's closing comments, he said: “We have turned an important corner and now we must pull together to build the bright prosperous future thats in Britains grasp – if we choose to seize it.
“Austerity is coming to an end – but discipline will remain.”

BROKEN PROMISE: Corbyn said 'austerity is not over' despite what Hammond says (Pic: SKY NEWS)

Hammond unveiled his economic plan for Britain amid uncertainty over the fate of Brexit.

A spokesman for the PM appeared to contradict Hammonds plans to change his financial strategy should Brexit negotiations between London and Brussels collapse.

"All of the spending commitments that the chancellor will set out today are funded irrespective of a deal," said the PM's spokesman.

"What the chancellor said yesterday was that he would use the fiscal reserves that we have built up through hard work and sound economic management to ensure that Britain will succeed whatever the circumstances.”

To honour spending commitments made in the budget, Hammond would use his "fiscal firepower" to ensure the economy is strong enough in the event of a no-deal Brexit.

The “fiscal firepower” comment appears to be a reference to the £15billion windfall for the economy announced by the Office for Budget Responsibility said in March.

Major announcements in the budget

Hammonds budget could be last as chancellor as Mrs May could be replaced as leader by next autumn.

The PMs government could be toppled within the next five months if she cannot secure a Brexit deal with Brussels by the leaving date – March 29 next year.

Hammond is yet to fund the promised £20 billion-a-year increase in NHS funding in England over the next five years announced by Mrs May in June.

While the improvement in the public finances has eased some of the pressure for tax increases, it is likely that the chancellor may still have to find additional revenue from somewhere.