Chancellor Philip Hammond claimed “austerity is over” as he cut taxes for millions across the UK and froze duty on beer, spirits and cider earlier this week.

Hammond announced a £100billion spree of spending commitments in a budget he promised would help ease the financial pain of “hard working families” and “strivers” after eight years of cutbacks.

Theresa May denied claims the government would build on the budget towards another snap vote.

Speaking at a press conference in Oslo, Norway, on Tuesday, she said: “We are not preparing for another general election.

“That would not be in the national interest.”

And speculation is rife as to how long Mrs May can remain as Prime Minister as Brexit unfolds.

Paul Webb, a professor of politics at the University of Sussex, told Daily Star Online: “In many ways it would seem unlikely that a PM who has faced such a torrid time in office, and who has many colleagues who would love to see her replaced, could survive for any longer. 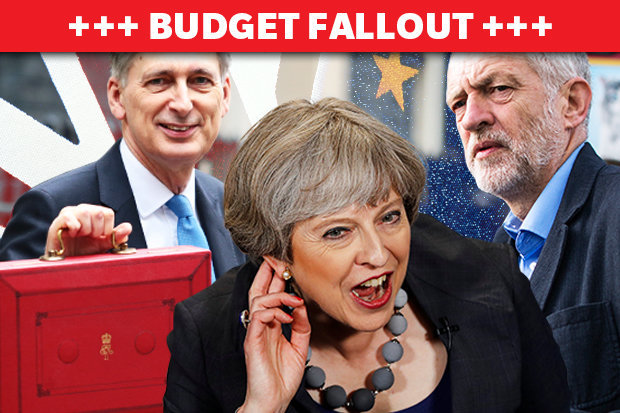 SNAP: Theresa May denied claims the government was building towards another snap vote (Pic: DS)

“But the problem for the party in general is who to replace her with – who would appeal to the electorate more and divide the party less?

“Boris Johnson, David Davis, and Jacob Rees-Mogg are all admired by some in the grassroots – but are detested by others.”

He added: “So much depends on the state and public appeal of the Opposition as well as the Tories own performance.”

Victoria Honeyman, lecturer in British Politics at the University of Leeds, agreed, telling Daily Star Online much would be down to how Jeremy Corbyns party adapted in the coming years.

“The desire to keep Jeremy Corbyn out of government is a real one and, I think, drives calls for calm within the Tory party.

“Labour did well in the last election but they were facing a shambles of a government.

“And to this day, in poll after poll, Corbyn fails to come out on top when stacked against Theresa May.”

Shadow chancellor John McDonnell earlier this week claimed the budget could signal a general election ahead.

BOOZE: Duty on beer, cider and spirits frozen for the next year (Pic: DS)

He told ITV's Good Morning Britain: "The Tories usually do this. If a general election is coming, what they'll do is they'll splash out some money and then if they win the election they then start cutting it back again."

Mr McDonnell dismissed the Chancellor's claim austerity is coming to an end as he insisted it is "rolling out still".

He said: "I think people will be crushingly disappointed at yesterday because it certainly wasn't the end (of austerity)."