The husband of Asia Bibi, the Christian woman recently freed from death row in Pakistan, is pleading for President Donald Trump and other Western leaders to grant his family asylum, as fears for her life persist.

In a brief video message seen by Reuters, Ashiq Masih also begged Canada and the U.K. to consider opening their doors to the persecuted mother of five, who is now believed to be living in terror at an undisclosed location in Pakistan.

Asia Bibi was acquitted last week by the Supreme Court of Pakistan of allegedly insulting Mohammed in 2009, which is a capital offense in Pakistan. She was accused of the crime by Muslim women from her small rural village outside of Lahore, Pakistan, who allegedly claimed she mocked Islam and its prophet during a quarrel over a cup of water.

Pakistani supporters of Jamaat-e-Islami (JI), a religious political party, chant slogans and gestures while waving the party flag during a protest following the Supreme Court decision to acquit Christian woman Asia Bibi of blasphemy, in Karachi on November 4, 2018. (Photo by RIZWAN TABASSUM / AFP)

When the other women refused to drink after her, saying that her faith had made the cup “unclean,” Bibi claimed to have responded, “Im not going to convert. I believe in my religion and in Jesus Christ, who died on the cross for the sins of mankind. What did your Prophet Mohammed ever do to save mankind? And why should it be me that converts instead of you?” (RELATED: Andrew Brunsons US Pastor Describes What It Was Like Inside Turkish Courtroom)

Within days, Bibi was set upon by a mob of enraged Muslims, who beat her viciously and brought her before the village cleric, who demanded she convert to Islam or be killed. Bibi, a Roman Catholic whose family was the only Christian one in her village, refused, but begged for mercy. Pakistani police escorted her to prison, and she was eventually charged with the crime. She remained on death row in a windowless, 8-by-10-foot cell in Lahore for nearly a decade. 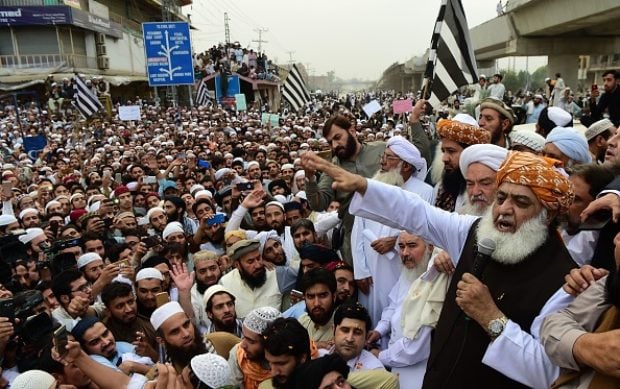 Since her acquittal, violent protests have erupted across Pakistan, bringing parts of the country “to a standstill,” according to the New York Times. Fearing for his familys safety, Bibis lawyer Saiful Malook has fled to Europe. In an attempt to placate the violent Islamist mobs, Pakistans prime minister Imran Khan has agreed to bar Bibi from leaving the country until the extremist group, Tehreek-e-Labbaik Pakistan, can appeal the verdict.

Wilson Chowdry, the chairman of the British Pakistani Christian Association, has said that keeping Bibi from leaving Pakistan is equivalent to “signing her death warrant.” Saroop Ijaz, a Pakistani lawyer, told the Times that “the stakes attached to Ms. Bibis case are extremely high.”