Rees-Mogg, leader of the influential European Research Group (ERG), accused the Prime Minister of a “deliberate decision not to deliver a proper Brexit” in a press conference outlining his alternative vision for leaving the EU in Westminster.

In a scathing assessment of her proposed Brexit deal, the MP for North East Somerset said her government was “led by Remainers” who want to keep Britain tied to the EU “as closely as possible”.

The leading Brexiteer is among the group of Tory MPs who have publicly confirmed they have submitted letters of no confidence in Mrs Mays leadership.

In a day of high drama in Westminster, Rees-Mogg confirmed he would be sending a no-confidence letter to Graham Brady, chairman of the 1922 Committee of Tory MPs.

At least 42 Tory MPs are thought to have submitted letters, but the bid to remove her appears to be fizzling out after Mrs May shored up support from Brexit-supporting cabinet ministers. 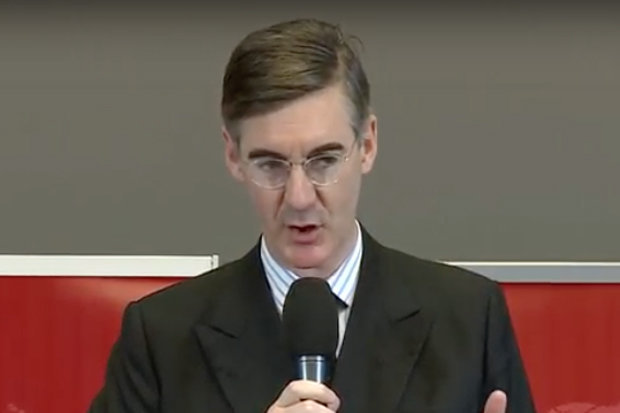 IT'S NOT A COUP: Rees-Mogg rejected the description of his bid to oust Mrs May as a coup (Pic: SKY NEWS)

When asked about the plot to remove Mrs May through a no-confidence vote, Rees-Mogg told reporters: “As for letters, patience is a virtue, virtue is a grace.

“We shall see whether the letters come in due time.

“Theres a meaningful vote as well and we shall see what happens with that to a government that seems to have alienated its partners in the confidence and supply arrangement.”

However, he disputed the description of a no-confidence vote as a “coup”, saying such language is “rather silly” and “damaging to political debate”.

“We shall see whether the letters come in due time”

“What I have done is use the democratic process within the Conservative Party to say we have no confidence in the leader,” he said.

“This is not an illegitimate process its one set out in the rules.”

The last time Rees-Mogg appeared at a press conference was to announce he had submitted a letter of no confidence in Mrs Mays leadership.

But today he appeared less confident of securing support for the vote, telling reporters: “People will make their decision – 47 will want to come with me, or not.

“It may be that they dont. They may do it when we get the meaningful vote.”

Rees-Mogg appeared alongside former Brexit secretary David Davis to promote the publication of a joint paper by the ERG and Global Britain called “Fact – NOT Friction: Exploding the myths of leaving the Customs Union”.

Mrs May will travel to Brussels on Wednesday for Brexit talks with European Commission president Jean-Claude Juncker.

Downing Street said the meeting was part of the "ongoing negotiations over the future framework" agreement with the EU.

It is understood the talks are set to focus on future long-term relations between the UK and EU, rather than on the withdrawal deal that Mrs May unveiled last week.

The move follows a stormy few days for Mrs May, which have seen the DUP deliver a warning shot across Government bows after accusing the Prime Minister of breaking fundamental promises on Brexit.

And a number of Tory MPs are still pushing for a vote of confidence in the PM, although their attempts to topple her appear to have stalled.

Justice Secretary David Gauke said a move to oust Mrs May would be "dangerous for the country".

He told BBC Breakfast: "The idea that at this point, in the middle of a very delicate negotiation, that is hugely important to the future of this country, that we should remove the Prime Minister, essentially leave us leaderless, for certainly several weeks, possibly months, would be hugely irresponsible.

"I don't think people should be talking about removing her at this point.

"I think that would be self-indulgent and dangerous for the country."