The number of boys being treated in hospital for eating disorders is at a record high.

In the last seven years, the number of boys going into hospitals in England, Scotland and Wales has nearly doubled from 235 in 2010 to 466 in 2018.

The figures are from the statistics agency NHS Digital.

Eating disorders are one of the biggest mental health issues for young people in the UK and while there are more girls going into hospital than boys, the number of boys getting help is rising much faster. 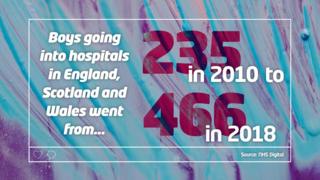 Health experts have put the growing numbers down to pressure from social media, but also more awareness about eating disorders may be encouraging boys to come forward to talk about their problems.

Experts are also noticing a condition called "bigorexia," that is becoming increasingly common among boys and young men, influencing an obsession with muscle definition and body shape. 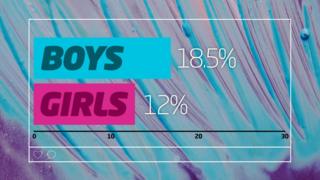 This year, for the first time, the number of boys being admitted to hospital has increased by 18.5% whereas for girls the number has gone up by 12% (Source: NHS Digital)

We'd love to hear what you think about this story. Let us know if you feel pressure from images you see on social media.

Get in touch and leave us a comment at the bottom of this page.

Jack: 'I felt alone and out of control'

Jack first started controlling what he was eating when he was 12 years old.

He got bullied at school and called fat. This happened at the same time that his mum and dad split up.

He said he felt sad, alone and out of control and so decided that the only thing he could control was the way he looked. He started eating less and started doing too much exercise.

Jack says that exercise changed from fun to be something that was a must – he had to go on a run to burn x amount of calories. 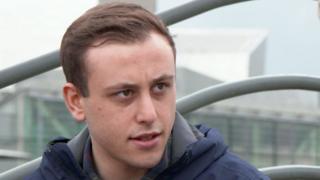 After less than two years, Jack became very ill. He couldn't walk, talk to his friends or even stay awake very long.

The turning point he says was 'when I admitted I had a problem' and he knew that he needed help. He went to see his doctor who transferred him to CAMHS – the Children's Mental Health Service. They admitted him into hospital where he was looked after and helped to get him better.

He also started talking about his issue, he was put on a meal plan which helped him eat more healthily and he started to be able to do exercise again – but in a way that was good for him.

One of the other important things that he did was to come off all his social media. He said that pictures online and comments from people were not helping him get better.

Jack says that social media was like "noise" – negative images and words that stopped him getting better.

Once he came off social media he started to see that the way he looked was not the most important thing.

After six months of getting help from both doctors and his family, Jack found that he could get better on his own. He started eating healthily and started running again.

Jack's now 20 and fully recovered from anorexia. He says that if he'd spoken to someone earlier he wouldn't have got so ill.

Could social media be putting more pressure on boys to look a certain way?

Child psychiatrist Sandeep Ranote says that although there is no research to prove that social media causes eating disorders, it definitely makes things worse.

She says: "A lot of social media platforms like Instagram and Snapchat are all about posting images that can be changed. They're not real… the impact of that on young people is that it leads you to think that's how you should look."

"Seeing that constantly can make you feel that you are not good enough and that can have an effect on your emotional health."

Social media can make people feel insecure about themselves

Newsround spoke to a number of boys in year nine and ten of high school and all of them have told us that they feel pressure from social media to look a certain way.

Another said that "people judge you for what you look like."

The boys also said that social media sites made them feel they had to look as good as celebrities on there. They also felt pressure to wear certain clothes and look good in pictures that they posted.

Some of them said that living up to expectations of how to look good could sometimes make them feel bad inside.

Oops you can't see this activity!

To enjoy Newsround at its best you will need to have JavaScript turned on.

X Factor finalists, brothers Sean and Conor Price, launched to fame after appearing on the TV show in 2017.

They talked about the images they post online and how they feel being in the public eye now.

Conor said: "You feel like you've always got to look good because you're going to be seen by people. There's definitely a bad side to social media because it's not real."

Sean added: "On social media everyone shows off their best side and there can be people sat at home saying 'Why isn't that me?'".

When the boys are on social media they admit that they often filter and change their images.

Conor said: "We definitely choose the best pictures… and are guilty of editing our pictures… but we try and keep it as real as possible."

The boys' single is called "Be like you", reflecting their message to other young people to try to be yourself, online and in life.

Beat is the UK's leading eating disorder charity. They offer advice, can get you support and offer safe helplines and chat sites where you can talk about your problems.

The sooner you get help for an eating disorder the better. Because the dangers to your health get much worse the longer you leave it.

Go and see your doctor. Doctors know all about mental health and won't judge you – they're there to help you.

Your GP may then refer you to a specialist service where you can start to get the help you need to get better.