The backstop protocol that prevents a hard border between Northern Ireland and the Republic of Ireland would stay in effect until another agreement replaced it, legal advice from attorney general Geoffrey Cox has revealed.

Under the backstop, Britain will remain in the customs union, meaning EU regulations will still be applicable and no "tariffs, quotas, rules of origin or customs processes" would be applied to trade.

In the six-page letter, Cox said the UK would not “lawfully” exit the backstop arrangement without a political agreement with the EU, risking a “stalemate”.

The fraught issue of the backstop has caused ruptures within Mrs Mays government, with Brexiteers fearing Britain could be trapped in the EU indefinitely under her withdrawal agreement. 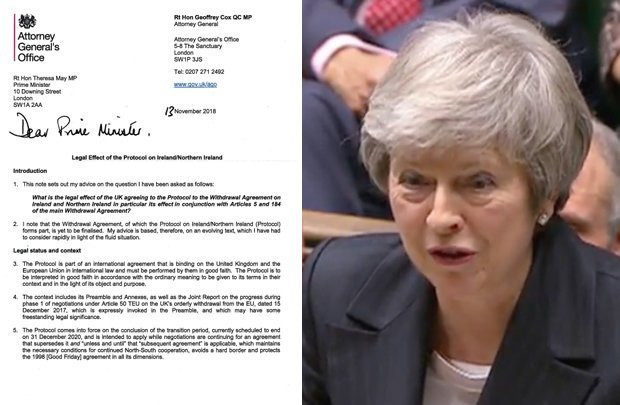 LEGAL BOMBSHELL: The backstop would remain in force until an agreement replaces it (Pic: DS)

The suspicions of MPs have been validated with the publication of Coxs legal advice, which will intensify the pressure on Mrs May ahead of the “meaningful vote” on Brexit on December 11.

MPs forced the government to release the legal advice after finding it in contempt for refusing to do so in a day of high drama in the House of Commons on Tuesday.

The backstop – essentially an insurance policy in the event of a no-deal Brexit – would “endure” even if negotiations broke down between Brussels and London, Cox believes.

“Despite statements in the protocol [the backstop] that it is not intended to be permanent, and the clear intention of the parties that it should be replaced by alternative, permanent arrangements, in international law the protocol would endure indefinitely until a superseding agreement took its place,” legal advice from Cox states.

STALEMATE: Britain could be trapped in the customs union if talks break down, Cox said (Pic: GETTY) Related Articles

“The protocol would endure indefinitely”

The backstop protocol would also allow the EU to argue that only Northern Ireland would need to remain in a customs union, Mr Cox's legal opinion says.

The SNP's Ian Blackford accused Mrs May of "concealing the facts on her Brexit deal".

The party's Westminster leader mocked the PM for having lost three votes yesterday and being found in contempt of Parliament, saying: "We were promised strong and stable – what we've got is a Government in crisis."

The MP for Ross, Skye and Lochaber asked: "Is it time that the Prime Minister took responsibility for concealing the facts on her Brexit deal from members in this House and the public?

"Will she take responsibility?"

Mrs May rejected the claim, and said the full legal advice they were forced to publish today was the same as the shortened statement the Government made earlier this week.

HOSTAGE: Jeremy Corbyn said Theresa May has Britain over a 'barrel' (Pic: PA)

"We have not concealed the facts on the Brexit deal from members of this house," she told parliament.

The PM appeared before MPs for PMQs on the second day a five-day debate on her Brexit deal.

Transport Secretary Chris Grayling has warned fellow Brexiteers voting against Mrs May's deal in the House of Commons about placing Brexit "in danger" by putting "shackles" on the government.

In remarks following a speech to transport and business leaders in Birmingham on Wednesday, he said: "You're not going to draw me on forecasting the future.

"What I know is that politics is moving very fast at the moment.

"What people on the Brexit side of the argument particularly need to ask themselves is are we prepared to put in danger leaving the European Union, after votes in the House of Commons which clearly try and put greater shackles on the government when it comes to Brexit."