Mr Williamson was replying to Tory MP for Colchester Will Quince, who asked him if there had been approaches from other Government departments about using the UK's "world-class armed forces personnel in the event of a no-deal Brexit".

Theresa May has faced vitriolic opposition to her proposed Brexit EU deal, surviving a no confidence vote from her own Conservative Party last week.

Labour Party leader Jeremy Corbyn threatened to spark a no confidence vote too, but it was turned down.

Communities Secretary James Brokenshire told the BBC there would be "consequences" of a no-deal Brexit.

He added "a lot of work" was going into minimising the disruption, if it happened.

"We have been taking 'no deal' seriously for quite some considerable period," he told BBC Radio 4's Today.

"It's not what we want to do, it's not what we still expect to do… but I think it is right and proper that we maintain our work on preparing for no deal, however reluctantly."

Brexit Secretary Stephen Barclay said the "tempo" of guidance from Government to businesses and households on how to prepare for a no-deal exit from the EU would increase. 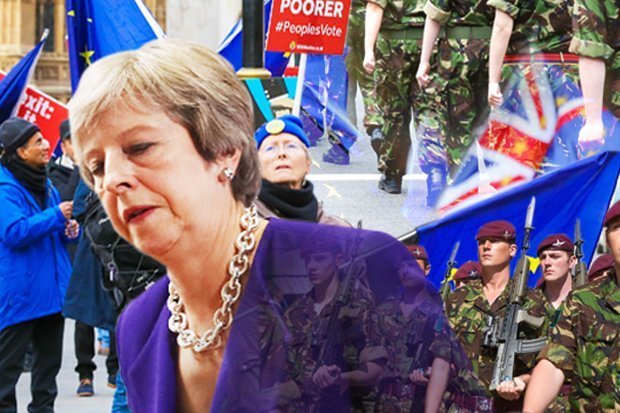 BATTLE: Theresa May has face widespread opposition to her deal in the House of Commons (Pic: GETTY)

"We need to get over to business that this is something they have to prepare for" with "a matter of 14 weeks until we leave the European Union", he said.

Mr Barclay said planning for a no-deal Brexit needs to be "much more of a priority for businesses up and down the country".

"The Government's priority remains to secure a deal, but we need to recognise with 14 weeks to go, that a responsible government is preparing for the eventuality that we leave without a deal," he said.

Downing Street said that advice on no-deal preparations will be going out to households by various channels over the coming weeks.

Businesses will be provided with a 100-plus page online pack to help them prepare and emails will be sent out to 80,000 of those most like to be affected over the next few days.