LONDON — British businesses will be given “time to adjust” to the end of free movement from the EU, U.K. Home Secretary Sajid Javid said while announcing plans for a “new route” for workers of any skill level to come to the U.K. for a year at a time after Brexit.

The policy, contained in the U.K. governments long-awaited white paper on immigration, will remain under review but could stay in place until 2025.

It would apply to nationals of unspecified “low risk” countries but is aimed at ensuring sectors that depend on EU labor continue to have access to it after Brexit, the white paper states. EU citizens automatic right to settle and work in the U.K. will end.

The white paper states that the U.K.s new immigration policy should “control the numbers and type of people” coming to the U.K. and should “reduce annual net migration to sustainable levels as set out in the Conservative Party manifesto.

However, speaking to BBC Radio 4s Today program on Wednesday, Javid refused to repeat the Tory 2017 manifestos commitment to bring annual net migration to the U.K. — currently estimated at around 273,000 — down to the “tens of thousands.”

There will be no cap on high-skilled workers coming to the U.K. from either EU or non-EU countries.

But when asked during her final Prime Ministers Questions session of 2018, Theresa May said – categorically — that reducing numbers to the tens of thousands was still the governments intention.

The government is not yet committing to this figure, and will now undergo a a 12-month period of consultation with businesses before finalizing immigration rules.

However, a new Immigration Bill, enshrining in law the end of free movement, will begin its passage through parliament on Thursday and will need to be completed by the U.K.s exit day if the country leaves the EU without a deal. 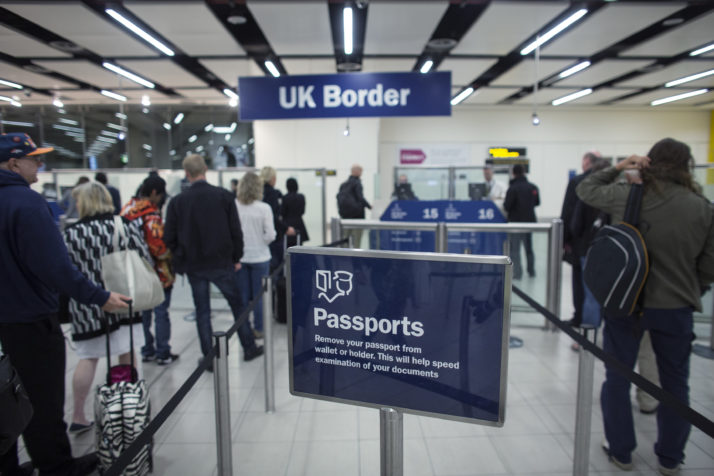 If the U.K. leaves with a deal, EU migrants will continue to enjoy their existing free movement rights during the 21-month transition period. When the transition ends in December 2020, the U.K.s new immigration rules will come into force.

The U.K.s final immigration rules could also be subject to trade negotiations with the EU and with other countries, which are likely to seek favorable access for their citizens as a quid pro quo for improved trading terms.

In his foreword to the white paper, Javid acknowledged that the “future system will be flexible as we go on to strike future trade deals with the EU and other countries.”

Under the new temporary “route,” workers would be able to secure a visa to come to the U.K. for a year, with or without a job offer. After 12 months they would be subject to a 12-month “cooling off period,” meaning they could not renew their temporary immigration status for a year. They would also be unable to access public funds or bring dependants to live with them.

The white paper states: “We acknowledge that there are particular difficulties in recruiting staff in certain parts of the UK, particularly more rural and remote areas and regions. We also recognise that some sectors have built up a reliance on lower skilled workers from the EU, often for relatively short periods, such as those which require additional workers in the run-up to Christmas.

“We recognise that employers in these areas require a period of time to change their ways of working once they have certainty about the shape of our future immigration system.”

Javid described the measures in his white paper foreword as “a transitional measure, a temporary short-term workers route to ensure businesses have the staff they need and to help employers move smoothly to the new immigration system.”

He added: “We understand this is the most significant change to the immigration system in more than 40 years, and so employers will need time to adjust.”

Read this next: Watchdog urges action to combat harassment in EU institutions