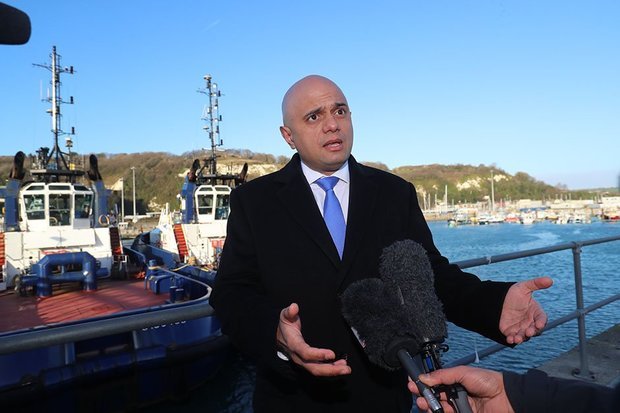 The Home Secretary announced two new ships have been added to the fleet in guarding the Channel (Pic: Getty)

The Home Secretary said the migrants were safe in France, and they should stay there.

Mr Javid was speaking yesterday during a visit to the Port of Dover as Border Force patrols were stepped up in the English Channel.

Two new ships have been added to the UK fleet which guards the waterway after a sudden surge in migrants from northern France trying to reach the south coast.

Mr Javid, who cut short his Christmas holiday after declaring "a major incident", said if migrants truly feared for their lives s they should have sought asylum in the first country they arrived in.

He added: "A question has to be asked, if you are a genuine asylum seeker why have you not sought asylum in the first safe country that you arrived in? Because France is not a country where anyone would argue it is not safe in any way whatsoever, and if you are genuine then why not seek asylum in your first safe country?"

The Home Secretary also hinted that the Government may veto asylum claims from people who arrive in makeshift boats to stop copycat sailings.

But his warning was branded "illegal" by human rights lawyers.

Colin Yeo, a leading immigration barrister, said: "Sending genuine refugees to face persecution in order to dissuade others from seeking to come here is plainly illegal." He added: "The latest asylum statistics show that around three-quarters of Iranian asylum claims succeed, so we are talking here about genuine refugees."

Mr Javid has also come under fire in recent days for calling those arriving at sea ports "illegal" migrants – even though it is not against the law to seek asylum.

Earlier in the week he said: "Our job here is to make sure this doesn't turn into a new route for ever-increased illegal migration, so I want to stop it now as much as I possibly can."

Paul Hook, from Refugee Action, said: "These are people first and foremost and they deserve a humanitarian response."