I've used similar phrases on my EU travels a fair bit since the UK voted to leave the EU almost three years ago. Each time, I get a similar response: a wry but friendly smile.Fellow Europeans seem ready to accept that some British citizens feel a shared remorse about Brexit. As we race to the deadline, smiles are still warmly given and genuine despite growing tensions between leaders — even in Ireland, which stands to be the most traumatized of all the EU nations by Brexit.European citizens feel sorry for us soon-to-be ex-EU folk. One man on his way to work in Dublin a few weeks ago told me he felt pity for the British. "They don't know what they are doing," he lamented. "They've been lied to." It is a benevolence we might not deserve, given the generations of jokes that have made the Irish the butt of British humour.But while we, as a people, still have the sympathy of so many of the EU's half-billion citizens, the British state is not faring so favourably. Prime Minister Theresa May in particular has become the focus of many of her EU partners' frustrations.

Theresa May under scrutiny

Ireland's Prime Minister and his deputy have for several months now been politely offering May advice to drop some red lines and reach across the political divide. But in her own way, May has ignored what seems obvious from the outside: When your back is to the wall and the fate of the nation lies in your hands, try compromising outside the confines of party interest.If there were ever any doubt that May intends to hold her own Conservative party together at the expense of national interest, it was stripped away this week. She teed her intentions up in a speech to the nation Wednesday, and Thursday put it in full inescapable view in Brussels. 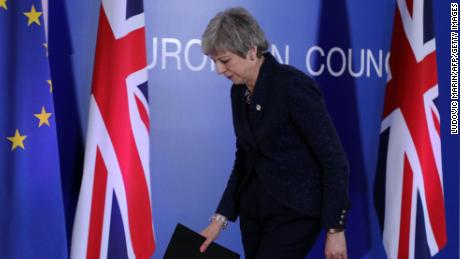 For 90 minutes, EU leaders questioned May about her Brexit plans. They asked her what would happen if she doesn't get her deal through Parliament, and — not for the first time — they came away disappointed.One EU diplomat told CNN that May had failed to articulate what she wants. She was "very evasive. No answers, no clarity, no way forward." It is a side of the Prime Minister that is becoming all too familiar in London.During her carefully planned TV address on Wednesday, May panned members of Parliament for failing to deliver the British people's Brexit wishes. But she didn't question her own role in creating the high-wire daily drama that has turned from national spectacle to spectacular international car crash.Parliamentarians were outraged, claiming that her blame put them in danger. Security officials advised them to share cab rides home.While May is a focus of anger at home, opinion abroad is also worsening. From a distance, Britain's long-esteemed political establishment appears to be crumbling, one of the original architects of modern democracy floundering in archaic and arcane process. Much as the British empire eroded publicly with nowhere to hide, the nation's humiliation over Brexit has staggered center stage.

The humiliating stumble toward Brexit

Britain — though I emphasize, not the British people — has become an embarrassing full stop to many conversations, if not yet a laughingstock, on the international diplomatic circuit. Discrete shakes of the head became eye rolls, which in turn became voluble despair.Initially, diplomats and other government officials both inside and outside the EU could not comprehend why the UK wants to leave the EU. Now they are struggling even more to grasp how and why British politicians are making such a hash of it.Read More – Source