MPs dramatically seized control of the Brexit agenda from Prime Minister Theresa May on Monday night – potentially paving the way for a "softer" deal that keeps the UK closer to Brussels.

The Commons voted by 329 to 302 – a majority of 27 – for a cross-party amendment to enable MPs to stage a series of "indicative votes" on alternatives to the Prime Minister's deal.

It came as pro-EU ministers Richard Harrington, Alistair Burt and Steve Brine announced they were quitting the Government.

Mr Harrington, a Business Minister, accused the Government of "playing roulette" with the lives and livelihoods of the people of Britain in its handling of Brexit. 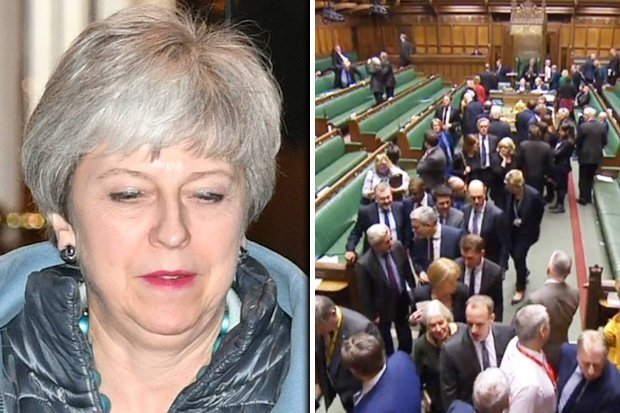 CHAOS: Ministers have resigned ahead of a Brexit vote (Pic: PA)

“Another humiliating defeat for a Prime Minister”

The result is another humiliation for Mrs May, who earlier warned MPs not to "overturn the balance of our democratic institutions" which means the Government normally controls business of the House.

She made clear she would not feel bound by the result of any indicative votes – which could include a "softer" Norway-style deal or a second referendum.

"No Government could give a blank cheque to commit to an outcome without knowing what it is," she said.

"So I cannot commit the Government to delivering the outcome of any votes held by this House. But I do commit to engaging constructively with this process."

He said: "This Government has been an abject failure and this House must now find a solution.

"This House must also consider whether any deal should be put to the people for a confirmatory vote.

"Where this Government has failed, this House must, and I believe will succeed."

ALISTAIR BURT: The pro-EU MP ditched Theresa May in a dramatic turn of events (Pic: GETTY)

MPs approved the cross-party amendment which allows Parliament to seize control of the Commons agenda to hold a series of indicative votes by 329 votes to 302, a majority of 27.