THERESA May was heckled and asked why she hasn't resigned after a disastrous set of local election results.

The PM was responding to her poll misery at the Welsh Tory conference.

Pundits are attributing the Tory woes, with more than 600 seats lost on councils across England, to the delay to Brexit and Mrs May's inability to get a deal through parliament.

An ex-county councillor in the audience shouted "why don't you resign" as she started her address, prompting him to be escorted out of the venue.

Speaking after he was ejected, Stuart Davies said he had heckled Mrs May and called for her to resign because of her handling of Brexit.

The 71-year-old, from Llangollen, said: "I am furious at what she has done to our party. To put it bluntly she is telling lies: 'we will be out by March the 29th'. 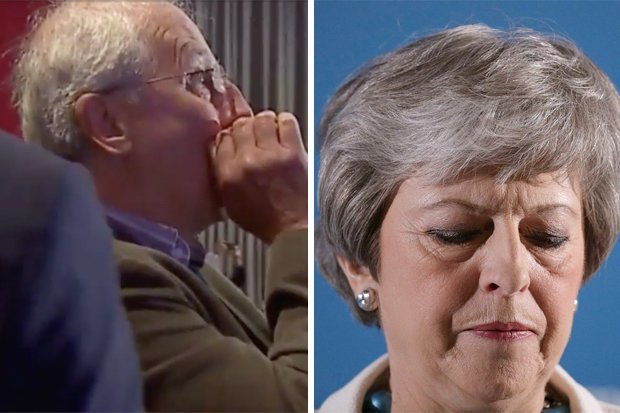 'RESIGN!' Theresa May was heckled at the start of her speech at the local elections (Pic: SKY/PA)

"If she's given a choice she always picks the wrong choice and that's what she's done all the way through.

"She doesn't listen to people. I knew this was my opportunity to get my views across and I think I share the views of a lot of people who are party members. I did what I did because I know it was the right thing to do."

Mrs May told the Welsh Conservatives in Llangollen: "I think there was a simple message from yesterday's elections to both us and the Labour Party – 'Just get on and deliver Brexit'."

She added: "These were always going to be difficult elections for us," she added, "and there were some challengiRead More – Source