In Lithuania, underage 19-year-olds get their friends to buy them beer at the bar. Neighbors bring back cheaper vodka from across the border in Belarus, and octogenarians sell illegal homemade whiskey called “samogon” from their homes.

For those in pursuit of a drink, the governments restrictive laws implemented in 2017 to increase the drinking age to 20, cut selling hours and raise excise taxes are largely a nuisance.

But for the ruling Farmers and Greens Union (LVŽS), and the partys Health Minister Aurelijus Veryga, who has become the public face of the reforms, its a gamble that unpopular policies designed to combat a major public health problem will eventually pay off.

The perception, especially among younger voters, that Veryga and his center-right party are out-of-date and authoritarian will be tested this month when Prime Minister Saulius Skvernelis stands for the party in the first round of the presidential election on May 12, and as LVŽS looks to win more than just the single seat it currently has in the European Parliament on May 26.

The country “will find a way to drink. Thats what Lithuanians do” — Marius Radušis

Veryga began an effort to decrease the nations alcohol consumption — the highest of any EU country, according to the most recent 2016 World Health Organization statistics — when he entered office in December 2016.

While Veryga calls the laws a “success,” theyve helped create an image that Veryga and the LVŽS — which is in coalition with the Social Democratic Labour Party — are a bunch of strict rule-setters. “We joke that Veryga would ban [90-degree] corners of a wall if he could,” 21-year-old student Erikas Dailidė said during an interview in a coffee shop in Vilnius.

Skvernelis is polling third in the presidential race, while LVŽS is predicted to come second behind the Homeland Union-Lithuanian Christian Democrats in the European election, mirroring its standing in national polls where it records 15 percent support. Veryga personally fares poorly, ranking as the second most unpopular politician in an April poll.

Critics of the alcohol laws dispute whether they have had any effect on most peoples consumption, even as they concede action is needed. Lithuania suffers from some of the worst rates of alcohol-related diseases, with the second highest rate of cardiovascular disease in the EU in 2016, and the highest number of deaths caused by tuberculosis in 2015. 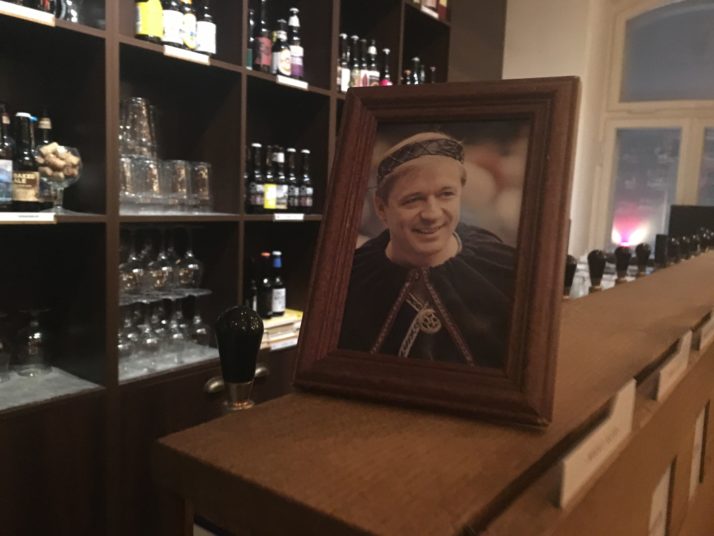 As 32-year-old Marius Radušis said over a non-alcoholic beer at a bar in Vilnius, with a framed photo of the LVŽS party leader Ramūnas Karbauskis dressed in pagan garb looking on (a bartender explained this was meant to be “ironic”): The country “will find a way to drink. Thats what Lithuanians do.”

Veryga, previously a respected alcohol researcher at the Lithuanian University of Health Sciences and a medical doctor, said in an interview that he was asked multiple times by other parties to become health minister. It wasnt until the LVŽS promised he could implement major public health reforms that he agreed.

In actioning his approach, Veryga essentially went down the list of the WHOs policy recommendations for decreasing alcohol consumption, starting with what the organization dubs its “best buys” for policymakers.

Other EU countries have taken steps to reduce drinking, such as Scotlands 2018 decision to implement a minimum unit price for alcohol. But no other country in the Union has done as much as Lithuania, and all at once, according to Carina Ferreira-Borges, the WHO Europe offices alcohol and illicit drugs program manager. She said the country has shown “clear leadership.”

People in Lithuania showed clear opposition. Young people, NGOs, the alcohol industry and opposition parties all argued against the laws — claiming people would purchase cheaper alcohol in other countries, that illegal trade and production would increase, or that they hindered individuals freedoms.

But despite those fears, “none of them came true,” said Veryga, sitting in his office in the Seimas parliament building with a small Lithuanian flag pinned to his jacket.

Government data suggests consumption has dropped by 1 liter of pure alcohol per person per year, “a huge decrease,” the minister said. The countrys coffers received an extra €80 million in 2018 from new excise taxes, and alcohol-related deaths dropped from approximately 900 in 2010 to 500 in 2018.

“It shows that despite all the measures said to stop alcohol consumption, its only success is that it clearly hits legal alcohol” — Kęstutis Kupšys, from the Alliance of Lithuanian Consumer Organizations

Yet posts on a Facebook group devoted to mocking the health minister and his party are numerous. Theres a parody rap about him, in which the singer says the situation in the country is so bad he wants to emigrate, and features the refrain, “Who do I see when I close my eyes? Precious Veryga.”

Veryga reports he cant walk down the street without being stopped, a rare level of public recognition for a health minister.

“Hes not a really a popular figure,” said Deimantė Rimkutė, the youngest member of Vilnius City Council, who was 18 when the laws were introduced and led a charge against them on behalf of the Lithuanian Liberal Youth.

Anti-Veryga groups dispute the validity of the governments statistics. When the health minister raised the drinking age to 20, Rimkutė said she still went to bars and friends bought drinks for her. Many underage drinkers have switched their nights out for nights in, drinking in apartments, while others hustle to buy alcohol before stores stop selling it at 8 p.m. most nights, or 3 p.m. on Sundays.

At Rimkutės inauguration celebrations at the end of April, she said people in the ministries celebrated with champagne and wine — just as those in the parliament did last year — even though drinking is banned ingovernment institutions.

Dailidė, a student at the Vilnius Vocational Education and Training Centre of Technology and Business, said his grandmother drinks just as much samogon now as she did when he was a little kid.

His “babushka” starts off an evening drinking around 250 milliliters of the throat-burning alcohol, Dailidė estimates, until she passes out and falls asleep. She continues drinking the next morning to cure her hangover, or “pachmiel.”
She buys samogon from a woman “up the hill” from her home in Klaipėda, Lithuanias major coastal city. With a liter selling for about €3, its affordable even for older people living on pensions or in poorer regions in the countryside.

Kęstutis Kupšys, a board member at the Alliance of Lithuanian Consumer Organizations, has been tracking illegal sales of alcohol, cigarettes and fuel in the country for years on a website called “Šešėlio žemėlapis: Lithuania without a shadow.” He said that since excise taxes have increased, illegal trade and production have also risen. 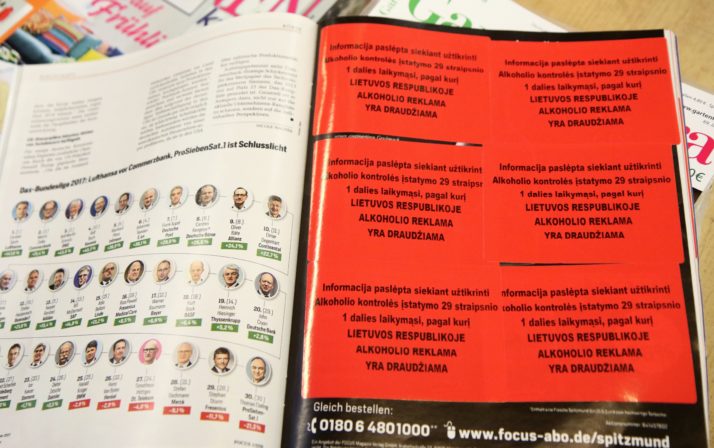 Kupšys said his site tracks more than 2,300 “tochkas,” or people who sell illegal products, with roughly 1,300 selling illegal alcohol since 2013. As those numbers only reflect those reported, he reasons the real activity must be much higher. “We will never get the true number,” Kupšys said.

“It shows that despite all the measures said to stop alcohol consumption, its only success is that it clearly hits legal alcohol,” he added.

Veryga disputes those claims. If there are more people drinking samogon, he asks, why arent more people arriving in hospitals highly intoxicated or with alcohol poisoning? He added that the government is helping to reduce the number of people addicted to alcohol through new counseling services.

Tomas Tomilinas, a member of parliament for LVŽS, said the partys alcohol policies were never intended to target addicts or people with long-term drinking problems, people like Dailidės babushka.

“I think that for the people that voted for our party, we showed that we can keep promises” — Aurelijus Veryga, Lithuanian health minister

“Of course people who are addicted … they should be treated with psychological care,” Tomilinas said, estimating that this affects 3-4 percent of the population.

The policies will instead help people who are at risk of becoming heavy drinkers, he said. “When you reduce consumption on the Read More – Source