LONDON — A no-deal Brexit will severely impact hospital services and could even prompt ward closures and interruptions to childrens services, according to planning documents seen by POLITICO.

Detailed preparations from 35 hospitals in England describe serious disruptions to the provision of health care services for patients in the event of a no-deal exit from the EU. One hospital said that a loss of EU staff could lead to the suspension of services, while another warned it may be unable to process diagnostic tests for Parkinsons disease because of missing medical supplies.

The internal documents, released under Freedom of Information rules in response to a request from pro-Remain organization Best for Britain, include risk assessments and contingency plans formulated by hospitals since the Brexit referendum, as well as correspondence with NHS England, the Department of Health and Social Care and the Department for Exiting the European Union.

Opposition Labour MP Paul Williams described the results as a “damning indictment of the government and its project to leave the EU.”

“We shouldnt be in a situation where hospitals across the country are scared about staffing levels and potentially having to cut back services in order to stay afloat,” he said. “These documents show that Brexit presents a real threat to patient care across the country.”

Most trusts continue to report grave concerns around the supply of medicines.

A spokesperson for the Department of Health and Social Care said: “As a responsible government, we must plan for every eventuality, including no deal, and we have been working closely with partners — including hospital trusts — across the health and social care system and industry to ensure we are as prepared as possible.”

Best for Britain requested 150 hospitals no-deal Brexit planning. Of the 78 replies, 35 responded with information; the remaining 43 refused, with many citing government guidance instructing them not to reveal Brexit planning so as not to escalate panic.

At least four of the hospital trusts that responded placed Brexit as a strategic risk to their ability to deliver their goals, with the Dudley Group NHS Foundation Trust giving a no-deal Brexit a risk rating of “catastrophic.”

“Its no wonder the government didnt want local hospitals releasing these Brexit planning documents. Theyre terrifying and highlight the scale of damage to our local communities that would be caused by a no-deal Brexit,” said interim CEO of Best for Britain, Naomi Smith. 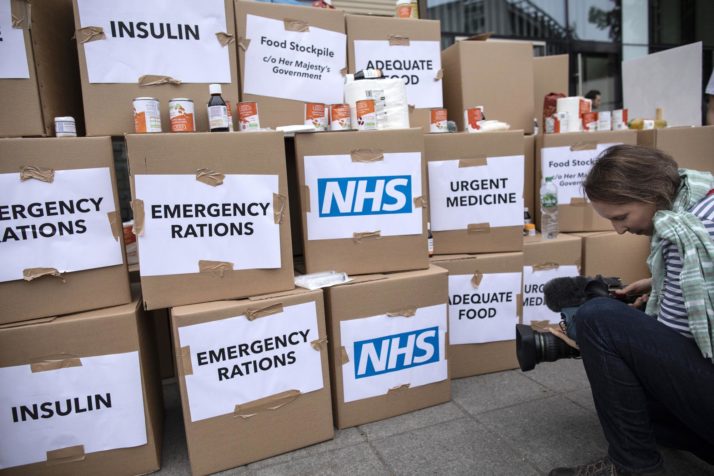 The campaign group “Our Future, Our Choice” carries out a photocall attempting to highlight the risk a no-deal Brexit poses to the NHS in London on August 22, 2018 | Dan Kitwood/Getty Images

Derbyshire Community Health Services said it is looking into the possibility of “suspending noncritical activities to prop-up the priority ones” if there are staffing shortages as a result of Brexit. This would include “wards, community, MIU (minor injuries unit), some childrens and general practice,” the East Midlands-based health service said.

Hospitals and professional lobbies say Brexit could significantly dent staffing in the National Health Service, with the government planning to limit the granting of skilled visas to those earning above £30,000 annually, and future arrangements for EU nationals seeking professional registration in the U.K. yet to be determined.

On top of visa and registration issues, “the biggest risk is likely to be the run on the pound which would make employment in the U.K. far less attractive,” according to the Christie NHS Foundation Trust.

Most trusts continue to report grave concerns around the supply of medicines. One hospital group said a no-deal Brexit may even force hospital pharmacies to resort to holding a “civil contingencies medicines stockpile” for emergencies, while several hospital groups said medicines shortages are already straining services.