Recently re-elected PM Narendra Modi has made boosting defense one of the cornerstones of his campaign. The task is tricky given the not-that-friendly neighbors, weak domestic produce, and rivalry among foreign suppliers.

India has been in quite a difficult security situation throughout its modern, post-colonial history, enjoying quite a rocky relationship with its neighbors.

On one side, it has its arch-nemesis – Pakistan; the two countries dispute the region of Kashmir, and have repeatedly engaged in full-blown wars and smaller military conflicts, with the latest happening earlier this year. 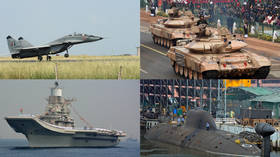 On the other, it has China – a powerful regional competitor which has outstanding border issues with India as well. To make things even more complicated for New Delhi, Beijing and Islamabad have been engaging in quite close military cooperation, even jointly producing military hardware – namely the JF-17 Thunder fighter jet (known in China as FC-1 Xiaolong).

Its quite unsurprising, given the tense security situation and vast population, that India has the second largest standing army in the world – nearly 1.5 million active personnel. While the size of the countrys military is exceeded only by Chinas 2 million, it operates a lot of quite dated hardware.

Among it, MiG-21 Bison fighter jets – while modernized, the planes date back to the 1960s – as well as ageing MiG-29s. While such planes are still quite capable, modern Sino-Pakistani jets, US-made F-16s, operated by Pakistan, and Chinas cutting-edge Chengdu J-20 stealth fighters are definitely a threat for them. Meanwhile, New Delhi has around 250 modern Russian Su-30 multirole fighters – its a capable force, arguably surpassing the potential of the whole Pakistani aircraft combined, yet it is no match for the vast and growing Chinese fleet.

With regards to land units, the situation appears to be brighter, the country has a very large amount of modern T-90 Russian main battle tanks, as well as older, Soviet-era models. Its neighbors, however, have large tank armies as well, with Pakistan having a big arsenal of Chinese copies of Soviet-era armor, as well as modern jointly produced Sino-Pakistani vehicles. China, for its part, is well beyond merely copying foreign designs, and is actively re-arming all the branches of its military with modern, domestically-built hardware.

Indias recently re-elected Prime Minister Narendra Modi, who made security issues an important part of his campaign, has appointed former Home Minister Rajnath Singh to tackle this dilemma, which may just be his greatest challenge so far. Basically, the country has three options to choose from – develop and produce its own equipment, buy it abroad, or try something in between by striking deals for licensed production on Indias soil.

Make it in India?

While New Delhi has been striving to achieve independence from foreign supplies of military hardware for years, the results have been quite modest at best. Hindustan Aeronautics HAL HF-24 fighter-bomber aircraft was the first Asian jet fighter to enter active service when it was delivered to the Indian Air Force in 1967. While the jet was envisioned as a supersonic aircraft, it was not actually able to show such performance and promptly became obsolete, retiring by 1990.

Indias homegrown tank, Arjun, has been burdened by similar issues. Its development dragged on since the 1970s, while production started only in the early 2000s. Despite being a homegrown concept, the machine uses many foreign components including the engine and transmission. A lack of imported spare parts has been plaguing the Arjun tanks, ultimately rendering some 75 percent of the whole fleet inoperable a few years ago.

“It has been almost 30 years since we started talking about indigenization of defense manufacturing. However, we are still not able to produce aircraft carriers, submarines and fifth generation fighter jets, as well as advanced communication equipment on our own. This is a big challenge for the years to come,” Sreeram Chaulia, a professor and dean at Jindal School of International Affairs, told RT.

India has been one of the largest importers of military hardware for years, and its clearly seeking to further upgrade and expand its arsenal. Recent examples are the purchase of 464 additional T-90 main battle tanks from Moscow, as well as the latest fighter jet manufacturing contract, worth $18 billion for 110 planes, eyed by both Boeing and Lockheed Martin.

Buying weapons from abroad, however, is a highly-politicized and tricky business, which India is now finding out the hard way. The US has already been particularly persistent in its attempts to make New Delhi drop its S-400 air defense systems contract with Moscow.

Also on rt.com US threatens serious implications for defence ties with India as it stands defiant over S-400 deal

This might be one of the “most pressing issues” Singh would potentially have to deal with “head-on” after taking over the defense portfolio, Kanwal Sibal, Indias former foreign minister, told RT.