The not guily plea came the same day a Superior Court judge issued a wide-ranging gag order, prohibiting a number of people involved in the case from discussing it in public or with the media. Fotis Dulos was arrested for a second time last week after investigators found a "bloodlike substance" with his wife's DNA in a truck he had access to the day she disappeared, according to a warrant released by the Connecticut State Police."Nothing places Fotis Dulos in that car," his attorney, Norm Pattis, said in the brief court appearance.Addressing reporters outside, Pattis reiterated his client's innocence, telling prosecutors, "When you're ready to try a case by appropriate evidentiary standards in a court of law you'll know where to find me.""I've got three words for the state — bring it on," Pattis added.Connecticut Superior Court Judge John Blawie's gag order prohibits all the attorneys and law enforcement involved in case, as well as Dulos, his family and potential witnesses from publicly discussing the case. A memorandum to the order cites a recent NBC "Dateline" special and several articles in which Dulos' attorney discusses his "gone girl" and revenge suicide theories as examples of remarks that could affect the trial. Pattis also "made disparaging remarks about her (Jennifer Dulos') mental health and personal life," the memo said. Also, members of an unknown police department have leaked nonpublic information about the investigation to the media, the memo said. Dulos, who has denied any connection to his estranged wife's disappearance, was due to appear in court Friday for the previous charges made against him in June. But court proceedings on all charges were continued until October 4.

The new charge against him was outlined in the police warrant, which contained shocking new allegations in the case of Jennifer Dulos, who has been missing since May. On the day of her disappearance, Fotis Dulos is believed to have driven a truck borrowed from one of his employees, according to the latest warrant. Fotis Dulos' girlfriend Michelle Troconis told police he had the truck cleaned days later, "because the body of Jennifer at some point was in there," according to the warrant.The employee told police that Dulos, on returning the truck, urged him to replace the seats, and got "pushy" and angry when the seats weren't changed out. Dulos told the employee he was worried about hair evidence in the truck, because he had hugged his estranged wife days before she disappeared, according to the warrant. The employee told police he kept the seats without telling Dulos, in case police needed them, the warrant said. Police later found the "bloodlike substance" that contained Jennifer Dulos' DNA on one of the seats.Investigators also found what police called "alibi scripts" in Dulos' business office, notes handwritten by Dulos and Troconis about activities and phone calls on the day Jennifer Dulos disappeared and the day after that turned out to be inaccurate and included "alibi witnesses who were later determined to be false," the warrant stated.Jennifer Dulos, 50, was last seen driving a 2017 Chevrolet Suburban on May 24 in New Canaan, police said. Her friends reported the mother of five — who was in a contentious child custody battle with her husband — missing after she missed appointments and they hadn't heard from her for 10 hours. Authorities found her car near a park, not far from her house.

The warrant also included still photos of Jennifer's vehicle heading toward her residence at 8:05 a.m. on the day she was reported missing. The image is captioned: "This photograph is the last known photograph of Jennifer alive. At the time this footage was recorded, Dulos is believed to have been lying in wait at 69 Welles Lane for his wife to return home. The crime and clean-up are believed to have occurred between 8:05 AM and 10:25 AM."Images in the new arrest warrant show a vehicle believed to be Dulos' employee's truck parked about 100 feet from where the missing woman's Suburban was later found abandoned.The warrant alleges Fotis Dulos parked his borrowed truck, then went to his estranged wife's home to wait for her to return. It alleges he drove her body away from her home in her car, then put the body into the borrowed truck.Her body has not been found.Police say they don't believe the employee was involved in the crime, according to the warrant.

Dulos briefly meets with the police 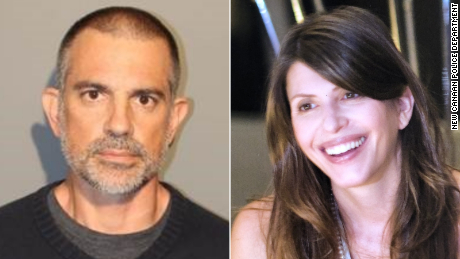 The day after Jennifer Dulos was reported missing, police asked Fotis Dulos to come to the New Canaan Police Department and assist investigators in the missing person case, according to the warrant. Dulos arrived with his attorney, but Dulos briefly met with investigators by himself in the lobby of the building.Dulos' attorney joined his client shortly thereafter and told investigators that he and his client were leaving and would not provide an interview to police, according to the Read More – Source