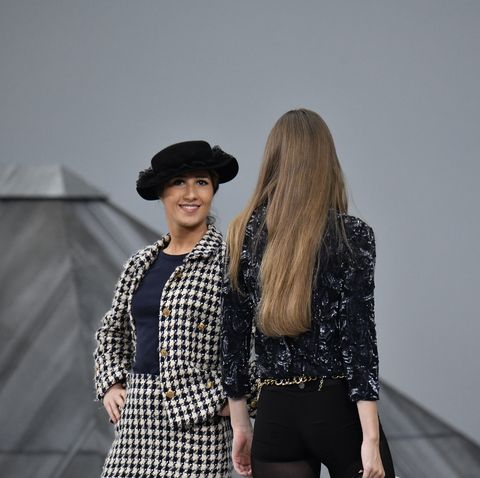 On the sixth day of Paris Fashion Week, an unwelcome prankster in a tweed suit darted onto the Chanel catwalk set under the beautiful art nouveau arches of the Grand Palais at the Champs-Élysées.

Except, the crowd of Chanel-clad fashion editors, influencers, and celebrities in attendance Tuesday morning didn't find the stunt—which Benoliel bragged she pulled just to prove she could—funny. In fact, to some the disruption was unsettling. "I got a little scared when homegirl flew out there," Cardi B. admitted after the show.

In a split-second reactionary move described by Bella Hadid as "iconic," a miffed Gigi Hadid steered the unwelcome interloper off the stage. Chanel collaborator Carine Roitfeld also praised the model's heroics, writing on Instagram: "Gigi saves the finale of the Chanel show from a catwalk crasher!"

When reached via email by ELLE.com, Benoliel complains that Hadid was "quite aggressive" to her, but refused to reveal what was actually said during their confrontation. Benoliel does say she thought Hadid might pull her hair and yell "as if we were school girls." However video evidence shows the model reacting like a calm bodyguard of sorts, placing a hand on Benoliel's shoulder and guiding her to the exit. "She clearly did not understand my comic approach," says Benoliel. "Gigi is obviously sublime and a fashion icon and I understand her reaction somewhat and continue to love her in spite of that."

Benoliel's outfit, a black and white two-piece she claims is vintage Chanel, came from her mother's closet. They both share, she says, a deep respect for the brand. The prank, she insists, was actually done as a "tribute."

"What I do is an exhaustive satire about our society," says Benoliel, who cites Borat star Sacha Baron Cohen as her inspiration. "I immerse myself in public events or situations… to show how funny some situations and sometimes extreme behaviors are. I am not making fun of people, I am pointing how silly some people can be when they lack distance and thinking."

This wasn't her first stunt this Paris Fashion Week. Last week, she strutted down lingerie brand Etam's catwalk and uploaded a clip to YouTube, where it's been viewed over 169,000 times. Benoliel has developed a large following both on YouTube (228,000 subscribers) and Instagram (202,000 followers), where she posts proof of her controversial stunts and all of which have received mixed responses.

Her "infiltration" of a Gay Pride parade received backlash on YouTube for being insulting to the LGBTQ+ community. Her response? "The video is both a crude caricature of homophobic behavior… and deals with humor with the exuberance inherent in the Pride, its freedom and its eccentricity.”