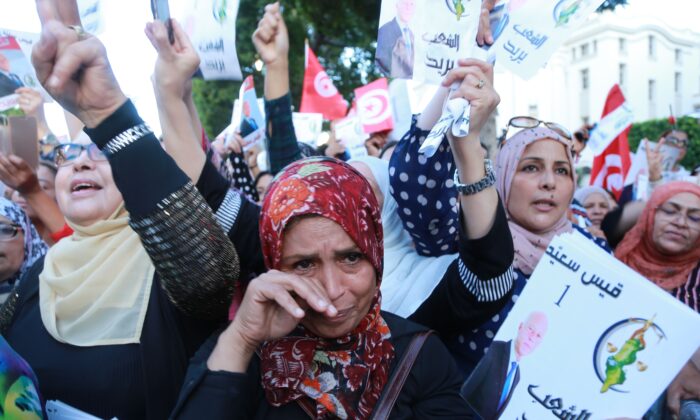 Supporters of Tunisian presidential candidate Kais Saied campaign in Tunis on Oct. 11, 2019. The frontrunner in Tunisia's presidential election runoff will go head-to-head tonight against his rival in a rare and highly anticipated televised debate just two days ahead the vote. Political newcomers Kais Saied, 61, an independent conservative academic, and business tycoon Nabil Karoui, 56, won through the first round of the poll in September, sweeping aside the country's post-Arab Spring establishment. (ANIS MILI/AFP via Getty Images)

TUNIS–Tunisian police used tear gas to disperse dozens of protesters who blocked roads in the southern town of Jelma on Saturday following the death of a young man who burned himself to death, witnesses said.

Abdelwahed Hablani, 25, set himself on fire and died in hospital on Friday in protest at poverty and poor living conditions, echoing the 2010 self immolation of Mohammed Bouazizi, whose death triggered the Arab Spring.

The protesters on Saturday afternoon burnt tires before police intervened to reopen roads, firing tear gas canisters, the witnesses said, but the demonstrations were continuing late into Saturday evening.