The powerful winter storm that trekked across the country and ruined many travel plans is leaving New England.The storm is moving Tuesday toward the Atlantic Ocean, but its outer bands will dump a final round of snow and an icy wintry mix throughout the day, CNN meteorologist Rob Shackelford said. Parts of Massachusetts could see another 4 to 8 inches of snow Tuesday, the National Weather Service said.But snow isn't what residents should worry about, Shackelford said. "Slush is the problem." Now, drivers from New Jersey to Boston face treacherous travel conditions.Meantime on the other side of the country, a storm that's deluged Northern California will begin to head east. And the West Coast is likely to get hit later this week with another storm.

Watch out for slippery roads in New England

In a little over 24 hours, parts of New England saw snowfall rates ranging from 3 to a whopping 20 inches — that number coming from Hampshire County, Massachusetts. 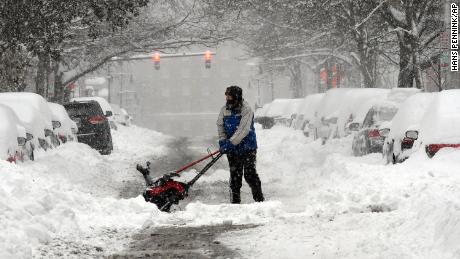 The governors of New York and Massachusetts urged residents stay home if they could.New York Gov. Andrew Cuomo asked drivers to stay off the roads after a bus crash Monday evening left nearly 30 passengers injured."For those who have to travel, take extreme caution on the roadways as our crews work 'round the clock to clear the snow and ice," Cuomo said. Massachusetts Gov. Charlie Baker warned drivers to build in extra time Tuesday if they're driving in the eastern part of the state or to consider taking public transportation."Plan on slippery road conditions," the National Weather Service's Boston office said. "If you must travel, keep an extra flashlight, food, and water in your vehicle in case of an emergency."In Connecticut, authorities since Sunday responded to at least 270 accidents, including 21 with injuries, State Police Trooper First Class Christine Jeltema said. And New Jersey State Police said they had responded to about 428 crashes as of Monday evening."If you don't have to go out, please stay home so road crews can treat the roads," New Jersey police said. The Massachusetts Department of Transportation also said anyone hitting the roads will just slow down the clean-up pRead More – Source