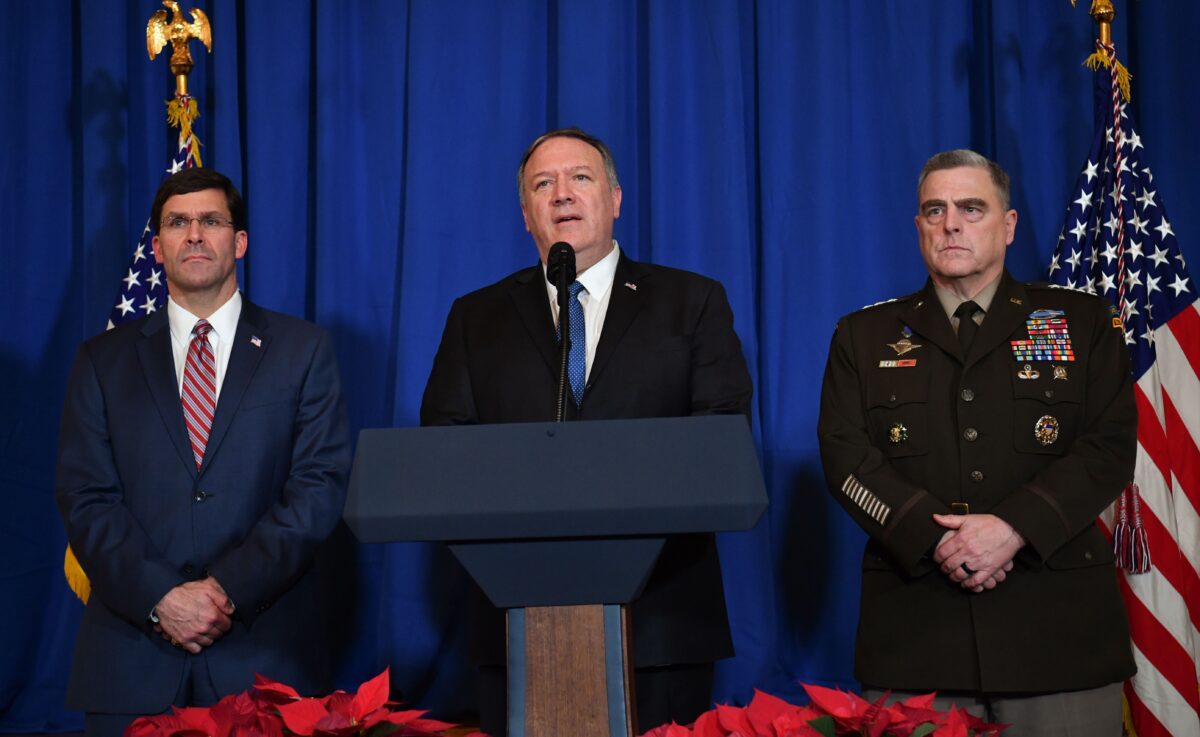 Secretary of State Mike Pompeo said that any target the U.S. military may strike in Iran, in retaliation to a possible attack on America or its interests by Tehran, would be a lawful target orchestrated solely to safeguard American interests, as Iran announced it would end its commitment to the 2015 nuclear deal.

In a Jan. 5 interview with ABCs “This Week,” Pompeo said hes seen what the Pentagon is planning “in terms of the target set,” adding that the Department of Defense is “continuing to develop options.” He said any U.S. military action wont break the laws of armed conflict, adding that the current administration has changed its strategy about how it combats threats from Iran.

“The American people should know that every target that we strike will be a lawful target, and it will be a target designed with a singular mission, of protecting and defending America,” Pompeo said.

The Islamic Republic of Iran has been at war with the United States and its allies since 1979, when the regime took power, and it has since carried out “massive numbers of terror attacks,” Peter Huessy, a senior defense consultant and director of strategic deterrent studies at the Mitchell Institute for Aerospace Studies, told The Epoch Times.

“The Iranian IRGC directed these attacks, and thus the administration taking out its head thug was a welcome, long overdue, and perfectly legal development—the first serious military pushback against Iran since Reagan,” Huessy said.

In April, the United States officially designated Irans Islamic Revolutionary Guard Corps (IRGC), which was led by Soleimani, as a foreign terrorist organization.

The Trump administration has abandoned the previous U.S. administrations focus on countering Iranian proxy groups, said Pompeo, who suggested the U.S. strike in Baghdad that killed Soleimani is an example of the new strategy.

“Were going to respond against the actual decision-makers, the people who are causing this threat from the Islamic Republic of Iran,” Pompeo said.

Mark Cancian, a senior adviser with the Center for Strategic and International Studies International Security Program, told The Epoch Times that the United States “has a lot of experience aligning its air campaigns with the laws of war.”

“Strikes on Iran would likely be limited to military targets, particularly the Quds force, of which Soleimani was the head and which has led the strikes on U.S. forces,” he said via email.

“The legality will be disputed. White House lawyers will argue that any strikes were in self-defense. The Iranians will argue that strikes violated its sovereignty and were acts of aggression.”

Trump commented a day earlier on Twitter, warning Iran that if the regime attacks Americans, Washington would target “52 Iranian sites … some at a very high level & important to Iran & the Iranian culture.”

The laws of armed conflict prohibit the deliberate targeting of cultural sites under most circumstances. Pompeo said the president “doesnt want war” but added that he would not “shy away from protecting America.”

Iran, meanwhile, remains the “worlds worst state sponsor of terrorism,” according to the Country Reports on Terrorism 2018 report published by the U.S. Department of State on Nov. 1, 2019. The regime has funded such international terrorist groups as Hezbollah, Hamas, and the Palestinian Islamic Jihad.