President Donald Trump said the failed impeachment efforts against him were a continuation of attempts that started the moment he declared his bid for the presidency in 2015.

Trump, 73, was speaking at the White House a day after he was acquitted by the Senate on both charges—obstruction of Congress and abuse of office—laid out by the House of Representatives.

“It started from the day we came down the elevator … and it never really stopped. Weve been going through this now for over three years,” he said.

“It was evil, it was corrupt, it was dirty cops. It was leakers, it was liars. It should never happen to another president again, ever.”

The moment was not a news conference or a speech, Trump said. “Its a celebration,” he said. “We went through hell, unfairly. We did nothing wrong.”

He held up a newspaper with the front page headline: “Trump acquitted,” triggering another lengthy round of applause. 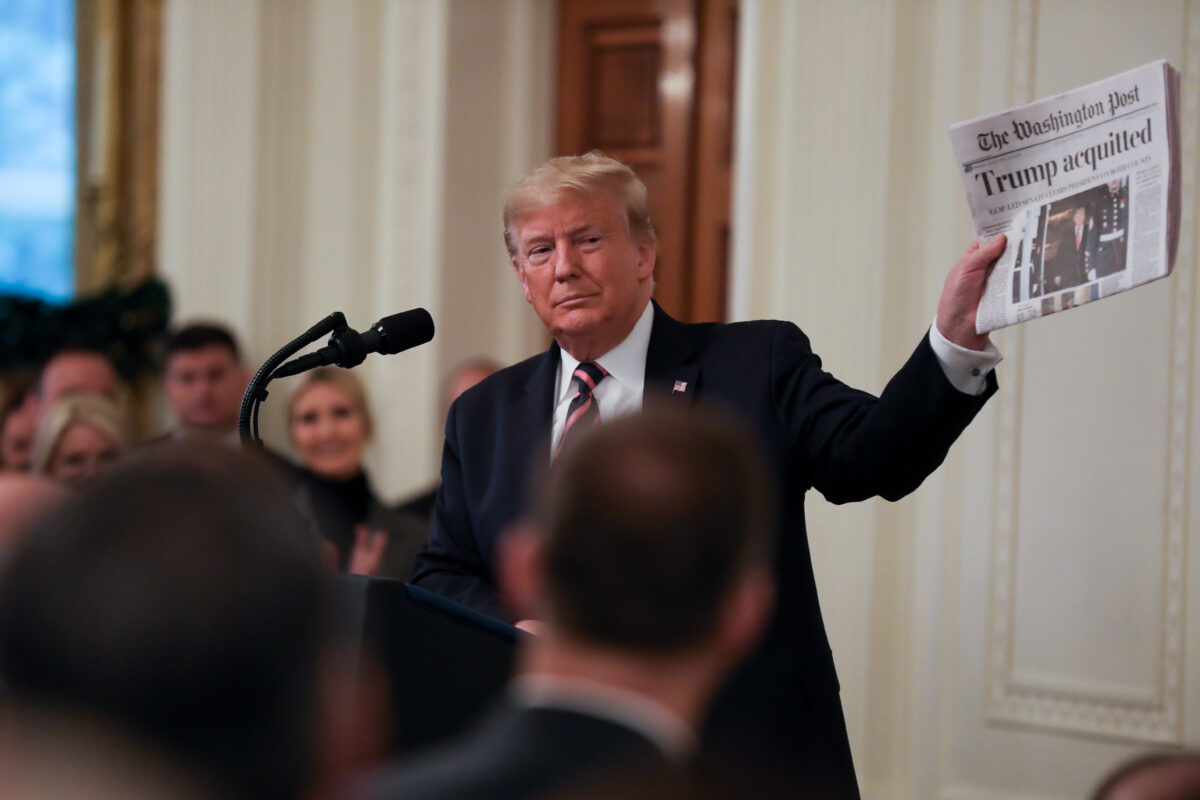 The last president to be impeached, President Bill Clinton, was also acquitted. Clinton spoke after he was acquitted on the White House lawn, telling the nation he was “profoundly sorry” for what he said and did to trigger the impeachment efforts “and the great burden they have imposed on the Congress and on the American people.”

Earlier Thursday, Trump spoke at the National Prayer Breakfast in Washington. He held up newspapers with front page stories about the acquittal in front of an audience that included lawmakers from both sides, including House Speaker Nancy Pelosi (D-Calif.).

Trump, who spoke about “creating a culture that protects freedom,” including religious freedom, also said he was trying to learn from people who dislike him.

“Were grateful to the people in this room for the love they show to religion. Not one religion, but many religions. Theyre brave, theyre brilliant, theyre fighters, they like people, and sometimes they hate people,” he said.

“Im sorry, I apologize. Im trying to learn. Its not easy. Its not easy. When they impeach you for nothing then youre supposed to like them, its not easy, folks. I do my best.”

Trump also said he doesnt believe some people who say they pray for him in an apparent jab at Pelosi.

“Weeks ago, and again yesterday, courageous Republican politicians and leaders had the wisdom, fortitude, and strength to do what everyone knows was right,” Trump said. “I dont like people who use their faith as justification for doing what they know is wrong. Nor do I like people who say I pray for you when they know thats not so.”