As a civil rights leader who worked in the Jim Crow South, Nash saw white mobs tearing into young civil rights activists with baseball bats and poor black families kicked off their land for trying to vote.But justice in a courtroom — with white judges and all-white juries — proved elusive. Nash says she saw one sham trial after another."If there was a trial of a white person who had done something against a black person, whites with integrity had better not convict because they would be ostracized," says Nash, now 81. "Their business would be boycotted, and in some instances their physical safety was compromised."Nash says she's seen a similar type of fear in the nation's capital, where President Trump's Senate impeachment acquittal resurrected some of the same memories that once convinced blacks they'd never find justice in a courtroom. "You don't have a real trial — you just have the appearance of a trial," Nash says. "A lot of the jurors in the South made their decision based on fear rather than the merits of the case. That's true now of some of these senators."There's a bitter irony in the fact that Trump's acquittal took place during Black History Month. For people like Nash, the impeachment trial offered one of the best history lessons America could ever want. If you are furious or dejected because you think Trump's trial was a farce, here's a quick reply from some black people: Welcome to our world.Republican senators acquitted Trump despite strong evidence that he abused the power of his office by trying to coerce a foreign country to interfere in a US presidential election. Republican Sen. Mitt Romney was the only member of his party to join Democrats in voting to convict Trump. Trump maintains he did nothing wrong.The lopsided result didn't surprise some black commentators. There's always been a different legal system for powerful whites than for other Americans, says Jonathan Walton, an activist and author of "Twelve Lies That Hold America Captive." "There is a 400-year-old list of acquittals, non-indictments, mistrials, and non-arrests" that convinced him Trump would never pay a price for any misdeeds, Walton wrote in a recent essay. "I would have to be ignorant to think that something different would happen," he told CNN.Walton, Nash and others who have suffered through or studied the Jim Crow era say they see several parallels between the mock justice of that time and Trump's impeachment trial.

Both have a preordained verdict

In the sham trials of the Jim Crow South, everyone knew the verdict before it was delivered. Blacks weren't allowed to serve on juries. White jurors routinely ignored evidence. Even Atticus Finch, the famed lawyer of the classic novel "To Kill a Mockingbird," couldn't persuade a jury to see wrong in a white person. The verdict for Trump's trial also seemedpreordained. Republican senators took an oath to render impartial justice. Yet Senate Majority Leader Mitch McConnell openly declared he was coordinating legal strategy with the White House. Some Republicans said publicly they hoped for a quick acquittal."The outcome of the trial is established before the trial takes place," says Nash. She says she witnessed one sham trial firsthand when she and other civil rights activists were arrested after staging a sit-in at a lunch counter that refused to serve blacks. When it became clear during the trial that the lawyers for the student activists were about to prevail, Nash says the trial judge did something she won't forget."The judge had a swivel chair and he just turned his back on us as we sat there," she says. "The trial was decided beforehand."

Many people grow up on legal dramas like "A Few Good Men" in which impassioned lawyers swing a verdict by presenting some dramatic evidence or surgically dissecting a witness' lies.But the all-white jurors of the Jim Crow South were notoriously indifferent to legal concepts such as evidence and witness testimony. Some legal experts call this "jury nullification." It's what happens when juries deliberately reject evidence or refuse to apply the law because it's contrary to their beliefs or sense of fairness.One of the most famous cases of jury nullification occurred during the 1955 trial of two white men in Mississippi who were accused of murdering Emmett Till, a black teenager who had allegedly whistled at a white woman. 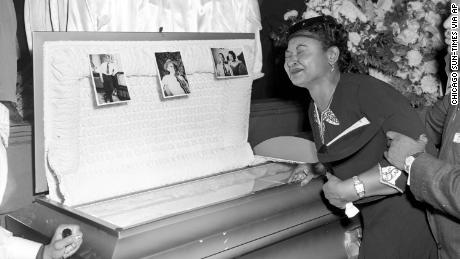 Witnesses testified they saw the men with Till and heard them beat him in a barn as he cried out, "Momma, Lord have mercy." But an all-white jury acquitted the men after deliberating for barely an hour.That kind of memory is part of the reason why Jim Galloway, a columnist with the Atlanta Journal Constitution, declared last month, "The trial of Donald Trump will end as one of the most famous cases of jury nullification on record. As a body, the Senate will reach a verdict of acquittal by setting aside or simply ignoring the facts of the case."Trump is cloaked with the same legal invincibility that allowed white men to get away with all sorts of crimes during the Jim Crow era, Walton says."You can be quoted talking about what you did, maybe even have it on video, and nothing is going to happen because your peers — white jurors or a Republican Senate — are not going to convict you," Walton says.

Both feature a judge who is just a prop

One of the wild cards in Trump's impeachment was speculation about the role of Supreme Court Chief Justice John Roberts, who presided over the trial. Would he break a potential tie or somehow intervene to force the admittance of evidence or testimony?As it turned out Roberts, though, played a mostly ceremonial function. Although decorum states that "senators should plan to be in attendance at all times during the proceedings," he allowed senators from both parties to leave the Senate floor.The only time Roberts showed some moral indignation came when he chastised senators for using harsh language within the Senate chamber. The chief justice was largely invisible for the rest of the trial.That invisibility triggered another disturbing case of deja vu for Nash. The judges in many Jim Crow mock trialsRead More – Source