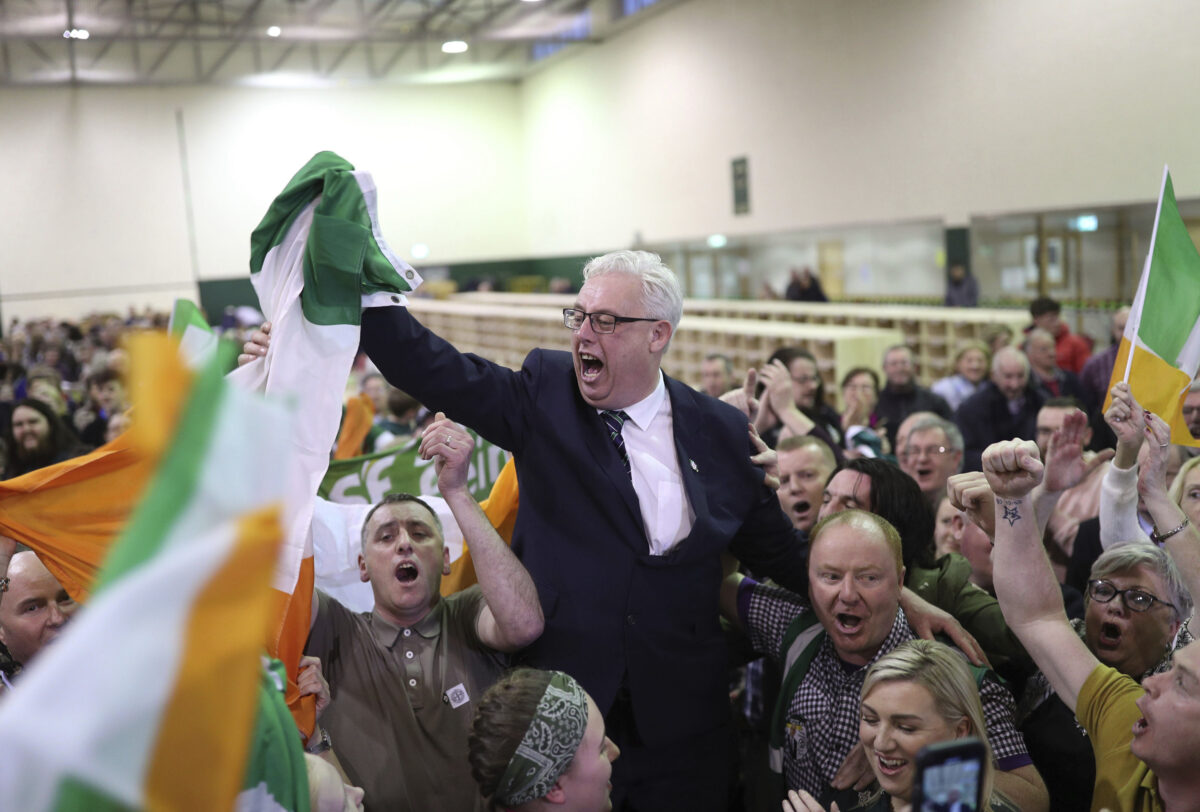 DUBLIN—Ireland braced for weeks of political uncertainty on Feb. 10 after an earth-shaking election that saw the Irish Republican Army-linked party Sinn Fein—long shunned by its bigger rivals—take the largest share of votes.

In a surge that upended Irelands traditional two-party system, the left-wing nationalist party beat both Fianna Fail and Fine Gael, the centrist parties that have governed Ireland since it won independence from Britain a century ago.

The vote in Feb. 8 election essentially split three ways, complicating the negotiations on forming a government that lie ahead.

“I think its a mess, to be honest with you,” said Pat OToole, a public sector worker in Dublin. “I think were going to be in a situation again where we are not going to be able to form a stable government in this country. I really dont know whats going to happen.”

Sinn Feins left-wing proposals for tackling Irelands housing crisis and creaking health care system proved a powerful draw for young voters in a country that is still dealing with aftershocks of the 2008 global financial crisis, which hammered its debt-driven “Celtic Tiger” economy.

Vote counting resumed Feb. 10 to fill all the seats in the 160-seat Dail, the lower house of Irelands Parliament. Ireland uses a proportional representation system in which voters rank candidates from first to last, with the lower preferences of elected or defeated candidates redistributed among their rivals.

Sinn Feins low number of candidates meant, however, that it could fall just short of the largest number of seats when two days of counting nears conclusion later on Feb. 10—likely behind Fianna Fail but potentially above Fine Gael. No party is likely to reach the 80 seats needed for a majority, making some form of coalition inevitable. But forming a stable alliance looks tough.

Both Fianna Fail and Fine Gael said before the election that they would not go into a coalition with Sinn Fein because of its links to past violence.

Varadkar said Fine Gaels stance was unchanged. “I say what I mean and I mean what I say,” he said on Feb. 10.

“I listen to the people. I respect the decision of the people,” he told Irish broadcaster RTE.

Talks among the parties are likely to take weeks, though some hope a new government can be formed by St. Patricks Day on March 17, when the Irish prime minister traditionally visits the White House.

Sinn Fein leader Mary Lou McDonald suggested her party could try to form a government with the support of independents and smaller parties such as the Social Democrats and Labour.

The IRA was responsible for murders, bombings, and other violence for decades during decades of violence known as the “Troubles” in Northern Ireland. More than 3,500 people were killed in conflict between forces that sought to reunify Northern Ireland with the Republic of Ireland and those who wanted Northern Ireland to remain part of the UK.

Supporters of Sinn Fein point out that it has been more than 20 years since Northern Irelands 1998 peace agreement and 15 years since the IRA announced the end of its violent campaign. Sinn Fein already sits in government in Northern Ireland as part of a power-sharing arrangement created by the peace process.

Eoin OMalley, associate professor of political science at Dublin City University, said the partys past meant little to younger voters without memories of living through the Troubles.

He said Sinn Fein had offered the clearest message on social problems in Ireland, which include a growing homelessness crisis, house prices that have risen faster than incomes, and a public health system that hasnt kept up with demand.

“Its a direct analog to the left-wing populism that you see in Greece and in Spain,” OMalley said. “In many ways, Sinn Fein are offering relativelRead More – Source