I look back on other periods of my life, like when 9/11 changed my career, and sharing felt natural and therapeutic and necessary. This time, I don't know where to begin. Perhaps because nobody knows how it ends.

A friend describes it like a switch that goes off: That moment you take the virus seriously and life changes, suddenly, completely. For us it began three weeks ago — on Friday, March 13, which happens to be our 16th wedding anniversary. That was the day that me, my husband, our two daughters, our shaggy mutt and a million Ikea bags stuffed with rations decamped from Queens to my parents' home in New Jersey. Schools had not yet been shut, but we made the decision to leave regardless. New York City felt like it was about to get bad. My employer, CNN, had moved to WFH mode. We returned to the house where I was raised outside Princeton and began setting up for three generations to live, indefinitely. If that strikes you as wildly irresponsible and the opposite of social-distancing guidance, imagine how we felt — possibly exposing my elderly parents to whatever we New Yorkers had acquired from subways and buses and Lyfts and lockers and classrooms and cubicles. But we were driven by even greater fears. First, mine: My father was recovering in a rehabilitation facility in central Jersey after a stroke in mid-February. I did not want my vivacious father (he had so many visitors at rehab that a therapist once asked me if he was famous) to be alone. In life or death. Second, my husband's fear: He did not want us to be separated. In the weeks after the stroke I had been commuting between my home, my parents' home, the hospital, then rehab and work. As coronavirus cases and closures grew, he feared that shut-down transit, bridges or tunnels could strand or divide us. And he weighed the dangers of coming and going versus sheltering in place. Sure enough, the Friday night we arrived, my father's rehab announced it would stop allowing visitors the next day. 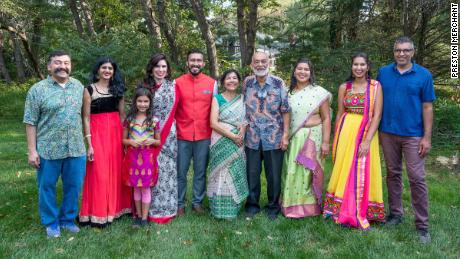 That night, Papa and I had our best conversation in a long while, just the two of us. I explained the virus was about to change everything. He asked me to take him home. When I asked how many girlfriends he had before Mommy, he impishly raised three fingers ("Not true," she later told me. "Just one.")Papa is disoriented and unable to swallow. This is his second stroke and we are hopeful, having witnessed the miracles of therapy and brain redevelopment before (like when he used the word "haberdashery" to identify a picture of a shirt and tie). But my father is 80 and I don't want the moments ahead — whether weeks or months or years — to be defined by isolation, infection risk and further confusion. I told my dad we would get him out. As I left I pumped hand sanitizer at his door, at the elevator, in the lobby and in the car.

The opposite of social distancing

It's an odd feeling to be here again. My father emigrated to the US from India in 1971 and my mother joined him two years later. Their lives, and thus ours, have been defined by migration. From apartment to apartment in New York City, then a house on Long Island. We lived in Puerto Rico through the 1980s before moving back to the mainland. My parents are adventurous types, not just calm in the face of uncertainty but the kind of people who rush toward it. Buying this cookie-cutter house, carved into a cornfield in a high-powered New Jersey school district, is probably the most sensible thing they ever did. I was 12 when we moved here, missing beaches and merengue and my old friends. I hated my pink bedroom carpet. I sometimes slammed doors. Now, there are six of us and our dog in this four-bedroom house. It is hardly crammed compared to when I was growing up. Back then there were my parents, us three kids and a rotating menagerie of pets: a dog, hamsters, rabbits, turtles, doves, parrots, fish, chicks and two pygmy goats that surprised us by growing. This house has hosted boisterous family gatherings like weddings and Thanksgivings and Easter egg hunts and one of the 67 harvest festivals we Indians celebrate. And the guests. We always had visiting family, friends, artists, musicians or even complete strangers from India staying with us. One time, my mother patiently counted out 12 (!) towels for a group making a pitstop on their way to Niagara Falls. 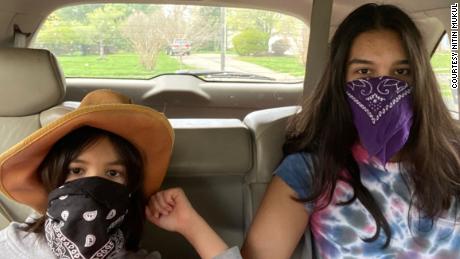 So being Indian has felt like the opposite of social distancing. Moving back and isolating has changed all that; our tones teeter between hushed and anguished, agitated and argumentative. Do we need a full-time home health aide? Are the kids watching too much TV? Can someone just please do the dishes? Should we get Papa out or leave him in rehab for more therapy — and at what risk? Is it safe for therapists to come to the house? It all takes me back to those years after we first moved in, my awkward adolescence, the dread I felt before a bad report card in high school. The stakes just feel so much higher now. This pandemic has forced us to revisit rules. We told the kids to stay several feet away from their grandparents, an order my 8-year-old violates repeatedly. My husband wipes down doorknobs, soap dispensers, counters and banisters daily. He's an artist and has set up a makeshift studio in the basement, with a table nearby for our younger daughter to log into her online classroom. A month in, I'm still roaming the house in search of the perfect workstation — trying out couches, tables, beds. During videoconference calls, I find myself apologizing for my backdrops: garish valances or a faded Shaquille O'Neal poster on the wall behind me.Life here can feel stuck in time, but we recognize the privilege of space, both inside and out. Recently, my 15-year-old daughter and I took Edison the dog out for his sixth walk of the day. We passed a former classmate's house and I remembered a fight I had with my parents about going to her Sweet 16 party over one Thanksgiving weekend."Why?" my daughter asked."My mom said I should be with family." "Did you go to the party?""Yup. But I was miserable, thinking how mad my mom was. She kept saying: 'One day, you will realize.'"

We had a plan if someone got sick: My old bedroom, still lined with certificates and graduation collages, would be the quarantine room. We didn't expect to need it so soon. Then my eldest daughter came down with a 102-degree fever. We left trays of food at the door, disinfected constantly and stayed on the other side of the house, not letting my mother so much as look in the direction of that bedroom. My daughter got the bathroom and the rest of us used the one in my parents' room, grateful we even had such options. 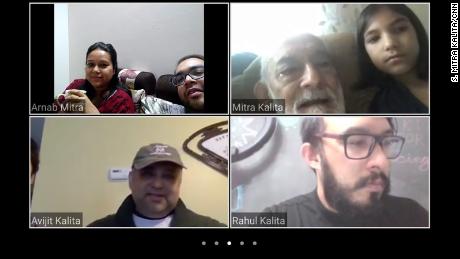 I was wracked with guilt, though. This is what I had feared most. Had I put my parents in harm's way? I had a flashback to covering 9/11 as a reporter — afterward, every time I drove through the Midtown or Lincoln tunnels I gripped the steering wheel for dear life, girding myself for another terror attack. I tried to remember when normalcy returned. I talked to a pediatrician and several other doctors. All assured me we were quarantining correctly and to keep monitoring my daughter's fever, which soon went down. By the time she was fever-free for 72 hours, we were still keeping her at a distance. But we had to move on to other pressing issues. Like my mother-in-law's fever. My in-laws moved to New Jersey last year to be closer to their sons. They were visiting India for much of coronavirus' early US spread and we convinced them to return early in case borders closed. They arrived March 18 and planned to quarantine for two weeks. The next day, my mother-in-law came down with a fever and other symptoms. She was hospitalized for a weekend, given a test for Covid-19 and released a few days later. We gave my in-laws strict orders to quarantine separately and my husband dropped groceries and homemade chili on their porch.Almost two weeks after she was tested, her results came back negative.

Over the last few weeks, I've seen friends online sharing ambitious projects like reading a book a day or baking lemon turmeric cake or making sourdough starter or learning Portuguese. I am so far from attempting any of this. I did learn how to pour Glucerna into my father's feeding tube. My mother commented on how efficient I was, and I thought it was a compliment but now realize it wasn't (because I'm usually running behind for something else I need to do). The days feel chock-a-block between those feedings, monitoring Papa's blood pressure and heart rate to keep him out of the hospital, our daughters' schooling and keeping their spirits up, and the relentless nature of this news cycle. 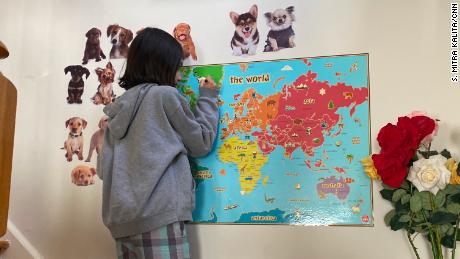 I spend about a third of my day on crafting news coverage, another third focused on the mental and physical health of my CNN team and the final third juggling family stuff. Finding time or ability to focus on anything else feels impossible. I wonder if the shock I contend with is not just about the virus but my parents' mortality. Or my own? My children's? The world's? I'm hardly alone. Two days into our quarantine I sent a tweet about my sandwich generation's predicament. "The reason GenX is taking this most seriously is because we are the current caretakers," I wrote. "So we are worried sick about our germy kids AND our at-risk parents and all that stands in between the spread from one to the other … is us." It was retweeted 12,000 times.As time goes on and our new lives seek rhythm, I wonder if there are lessons to be learned from my surrounding generations. Our immigrant parents came here with little but uncertainty. That which we complain about now — not being able to travel, get our nails done, see friends and family — is something they endured for years, partly a result of starting out with little, then because their thrifty wayRead More – Source

The post I didn’t want my father to be alone. My husband was scared that we’d get separated. This is what we decided appeared first on News Wire Now.