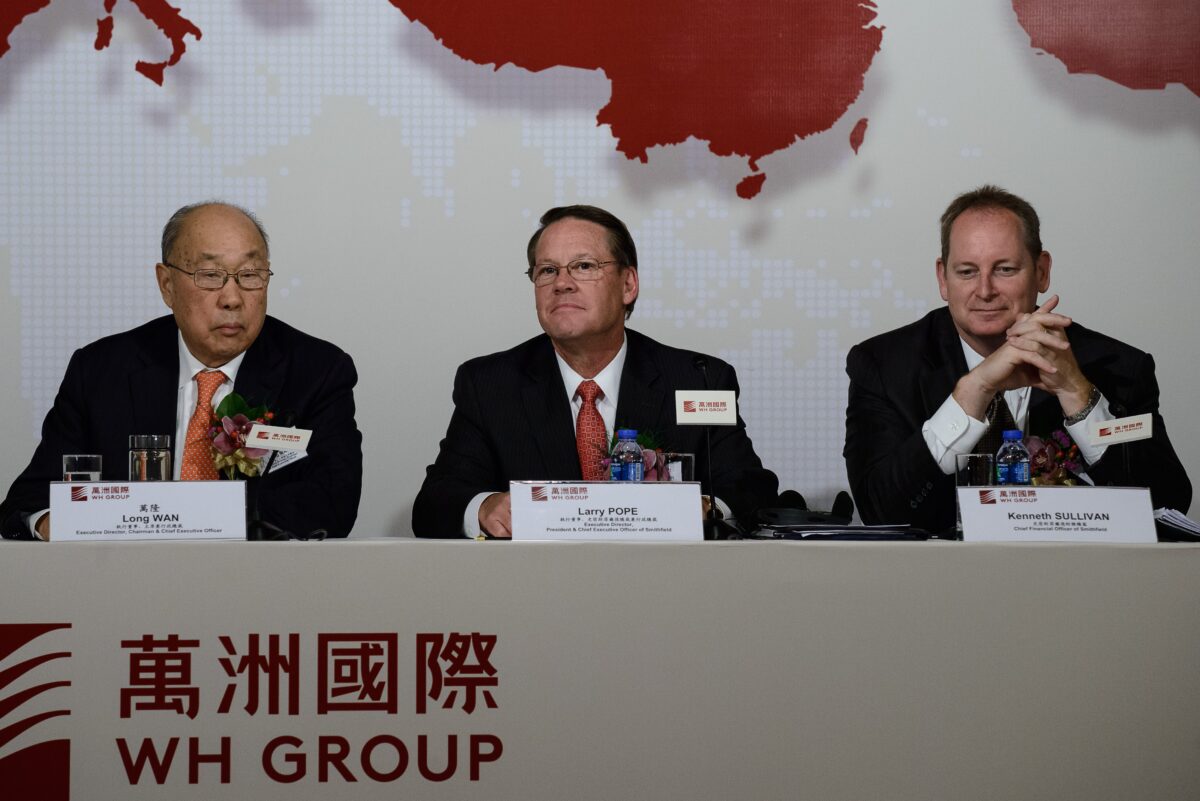 A Smithfield Foods pork processing plant in Sioux Falls, South Dakota, was visited by representatives from its Chinese Communist Party-tied parent company one month before the first COVID-19 case was confirmed at the facility, according to three employees.

After the first illness was confirmed at the plant on March 26, the facility quickly became the epicenter of the states outbreak of the CCP (Chinese Communist Party) virus, commonly known as the novel coronavirus. South Dakota Gov. Kristi Noem wrote in an April 11 letter that 238 plant employees had contracted the virus, accounting for 38 percent of the states confirmed cases at the time.

The outbreak has intensified since. More than 518 employees have tested positive for the virus as of April 15, in addition to 126 non-employees who have become infected after coming into contact with a Smithfield employee, according to the South Dakota Department of Health.

Executives from WH Group, Smithfields parent company in China, regularly visit the plant, according to two employees. The visit preceding the first confirmed case didnt include a plant tour and was limited to meetings in a separate building, another employee said. The visit took place roughly a month after President Donald Trump had banned travel from China, where the pandemic originated. All of the employees spoke on condition of anonymity.

Three employees told The Epoch Times that the company offered workers a $500 bonus to keep working after the plant had its first confirmed case. One employee said he or she had informed management multiple times about feeling ill, but was told to keep working. The worker eventually tested positive for COVID-19.

“Whenever anyone felt sick or didnt feel the best after we started becoming short-staffed, they would try [to] keep [you] there no matter what,” the employee said.

When asked about management ignoring reports of sickness, another worker said the allegation “is completely false.”

“All employees who felt a minimal symptom were sent home with a medical recommendation,” the worker said, adding that the plant had sanitary and social distancing measures in place.

Smithfield Foods declined to comment to The Epoch Times; WH Group didnt respond to a request for comment.

The Sioux Falls plant already was under a three-day shutdown related to the outbreak when Gov. Noem asked Smithfield to close the plant—which processes 4 to 5 percent of all pork in the United States—for at least two weeks. Smithfield responded by shuttering the plant indefinitely.

Smithfield said it would pay its 3,700 employees for two weeks after the shutdown. Kenneth Sullivan, Smithfields CEO, described the closure of the plant in dire terms. The company didnt say whether its Chinese parent company played a role in drafting the press release.

“The closure of this facility, combined with a growing list of other protein plants that have shuttered across our industry, is pushing our country perilously close to the edge in terms of our meat supply,” Sullivan said. “It is impossible to keep our grocery stores stocked if our plants are not running.”

The 2013 purchase of Smithfield Foods by WH Group was at the time the largest acquisition of a U.S. company by a Chinese firm. The purchase made WH Group—known as Shuanghui International at the time—the worlds largest pork producer. The takeover was approved by the Obama administration.

The owner of WH Group, Wan Long, holds a seat on the National Peoples Congress, the legislature of the CCP. Wans path to dominance in Chinas pork market was cleared by Li Keqiang, according to an account by the state-run news agency Xinhua, cited by The Wall Street Journal. Li is now the second-ranking member of the Politburo Standing Committee of the CCP.

The connection between the CCP and the Smithfield plant fits a pattern of locales and entities with strong ties to the communist regime being hardest-hit by the pandemic. Lured by trade benefits or caving to Beijings pressure, governments and officials in many regions have taken accommodating stances toward the Chinese regime.

Last year, amid a hog fever outbreak in China, Smithfield shifted production in at least one U.S. plant to accommodate the Chinese market. The company did so with the knowledge that the move could create a shortage in the United States in 2020. Smithfields director of raw materials procurement, Arnold Silver, told an industry conference in late 2019 that sales to China could eventually create bacon and ham shoRead More – Source