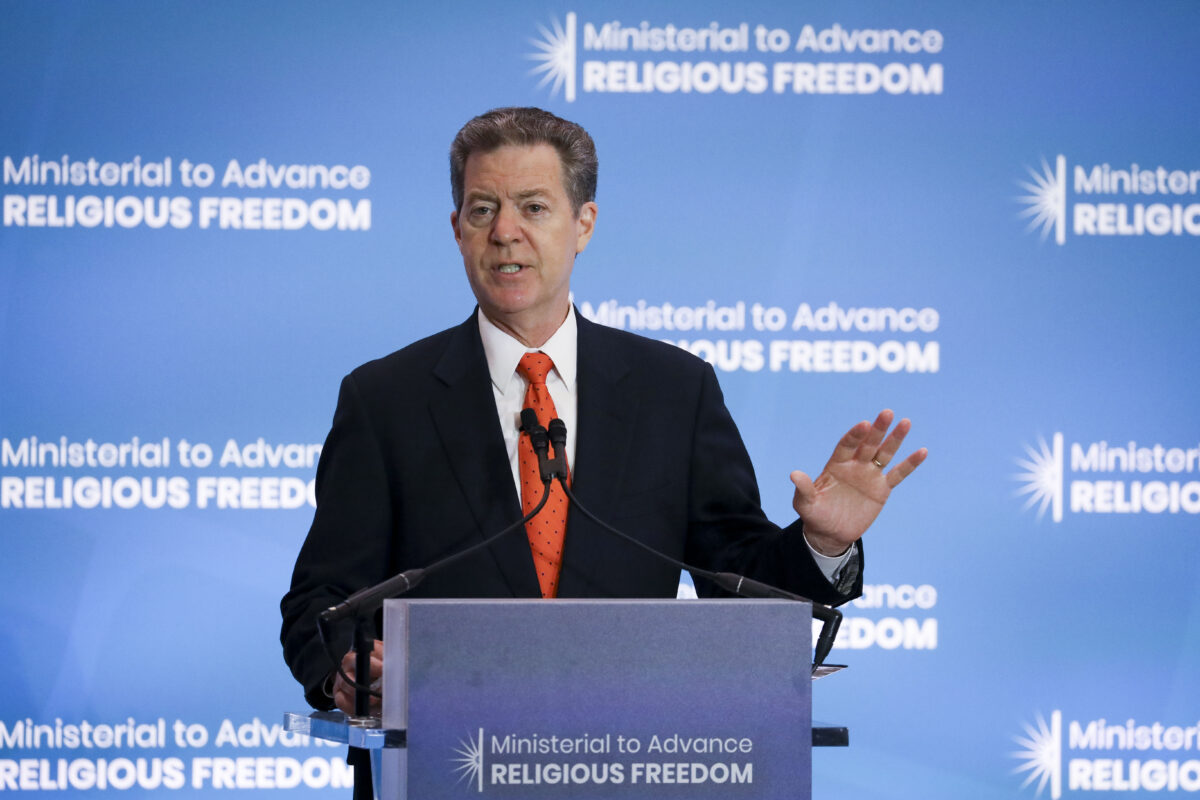 Around the world, prison populations are at some of the highest risk for infection from COVID-19, the disease caused by the CCP virus.

Living, working, and dining in necessarily close and often cramped quarters, those imprisoned have little protection from the virus should even one person become ill. Among those vulnerable, none are more unjustly at risk than those who are in prison for their religious beliefs.

Ambassador Sam Brownback, U.S. Ambassador-at-Large for International Religious Freedom, addressed that subject on April 15 by calling upon countries around the world to release prisoners held for their religious beliefs and practices.

At a briefing given for the New York Foreign Press Center of the State Department, Brownback said that “the key point here Id like to make is that we are seeing some countries release religious prisoners because of the COVID-19 crisis, because of the public health concern, because its the right thing to do, because its the right thing for their country not to keep people, religious prisoners, in prison in the first place.”

Brownback added that such prisoners shouldnt be “subjected to…the spread of the virus within a crowded prison, [an] unsanitary situation.”

Brownback is not new to fighting for the rights of religious observers. While serving as senator from Kansas, Brownback worked on behalf of freedom of religion for countries around the world. He was a key sponsor of the International Religious Freedom Act of 1998, which created the ambassadorship that he now holds.

But while some countries have indeed released not only prisoners, but also prisoners held for their religious beliefs, China is not among them.

Brownback said that countries including “Afghanistan, Azerbaijan, Bahrain, Ethiopia, Ghana, Indonesia, Iran, Israel, Italy, Jordan, Saudi Arabia, Somaliland, Syria, and Tunisia all have some prisoner release programs taking place, and in a number of these cases having some religious prisoners that are being released amongst the entire group thats being released.”

Other nations, however, have not stepped up. “We call on governments, including those in China, Eritrea, Indonesia, Iran, Pakistan, Russia, Saudi Arabia, Tajikistan, Turkmenistan, Vietnam, Yemen, and others alike, to release those individuals who are in detention for their religious beliefs and practices, and who remain there,” Brownback said.

But Brownback also highlighted a dilemma between his Commissions mandate and the realities presented by the pandemic. Brownback heads the United States Commission on International Religious Freedom (USCIRF).

“All the countries of the world are trying to cooperate to the degree they can to deal with this threat facing all of humanity on the planet…At the same time, were asking that these nations really step up and address this situation…of religious prisoners in their own nation,” he said.

China is designated by the Commission on International Religious Freedom as a Tier 1 Country of Particular Concern, or CPC, the highest level of criticism and condemnation that the commission can issue on the condition of religious freedoms in any country.

Despite decades of engagement and investment by companies from around the world, and hundreds of thousands of Chinese students receiving high school and university education in the United States and other Western countries, Chinas religious rights record is worsening, and regulations are becoming more, not less stringent.

On Feb. 1 of this year, a new set of “administrative measures” governing religious groups in China came into force.

These regulations not only further codify and strengthen Chinas already authoritarian supervision and control over religious practices, they officially require religious groups to publicize, teach—and accept—the principles of the Chinese Communist Party (CCP).

The new regulations also require religious organizations to “provide interpretations for doctrines and canons that meet the requirements of the development and progress of modern China, and in accordance Read More – Source