The National Weather Service in Jackson, Mississippi, reported a large tornado on the ground in Lamar County, in the south of the state, Sunday evening. Earlier, in Texas a tornado was confirmed in Brazoria County, and another possible twister was spotted in Liberty County. Three tornado watches are in effect for parts of southern Alabama, Mississippi and Louisiana Sunday evening, meaning conditions are favorable for tornadoes and severe thunderstorms, after storms passed through Texas.The storms will push into Georgia Sunday night before moving into the Carolinas on Monday. A few strong tornadoes, widespread large hail and damaging winds up to 70 mph are likely over the next several hours.That large hail slammed Fort Worth, Texas, according to video from a Twitter user.In addition, parts of Alabama experienced similar damaging hail and downed trees. Shaina Scott of Alexander City, Alabama, said the hail had pelted holes in the side of her house. Johnette Lamborne told CNN her family is safe but that the hail damaged her home, car and storage shed. 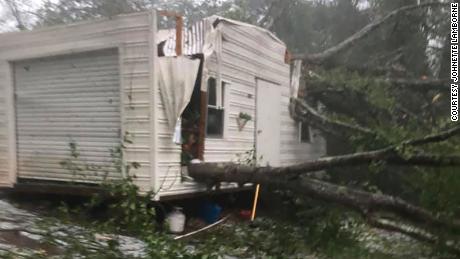 Overall, more than 50 million people face the threat of severe storms from eastern Texas to South Carolina, and millions of them are under flash flood watches. For cities like Montgomery, Alabama, and Jackson, Mississippi, a level 4 out of 5 severe threat exists, where strong tornadoes (EF2 or stronger) are possible, along with large hail. The storm system is similar to the one that hit the region last week, leaving at least 32 people dead and causing extensive damage."No two weather patterns are ever the same, but these are very similar," said CNN meteorologist Gene Norman. "That being said, there are big differences between this Sunday and what happened Easter. For example, the position of the jet stream is further south than on Easter, and there also is not as much shear in the atmosphere for these locations."Some cities that were hit by tornadoes last week, including Monroe, Louisiana, and Bassfield, Mississippi, are included in Sunday's Tornado Watch area. At least 200 to 300 structures were damaged in Monroe last week, Mayor Jamie Mayo said.

Norman said that the deeper moisture is still along the Gulf Coast this weekend. On Easter, that moisture surged all the way to the Great Lakes. This could limit how widespread these storms may be compared to last week's event.Track the storms this weekend here >>> 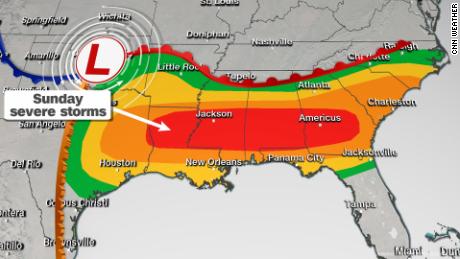 "While unusual to see nearly identical-looking threats exactly one week apart, this is the peak time of year for severe weather and tornadoes across the southern US, especially in the area called Dixie Alley," CNN meteorologist Brandon Miller said.The area, like Tornado Alley in the Plains stateRead More – Source