The center of the storm is located about 40 miles north of Baton Rouge with maximum sustained winds of 35mph, according to the National Hurricane Center.Storm surge warnings remain in effect from the mouth of the Mississippi River towards Ocean Springs, Mississippi, including Lake Borgne.The storm will dump heavy rain that could lead to flash flooding, mainly across the Mississippi River Valley in Louisiana, Mississippi and Arkansas.Life-threatening storm surges could occur in parts of Mississippi and Louisiana. Storm surges occur when rising water moves inland from the coast, potentially causing injury and damage to property. "A storm surge is a major threat, and it's the number one killer in tropical storms like this," CNN meteorologist Derek Van Dam said.New Orleans issued a voluntary evacuation order Sunday afternoon as well for areas outside the levee system.Track Tropical Storm Cristobal here >>>"The earliest calendar year landfalling named storm in Louisiana on record (since 1851) is Tropical Storm Arlene on May 30, 1959," Phil Klotzbach, a meteorologist at Colorado State University, said on Twitter. "The 2nd earliest landfalling named storms in LA are unnamed tropical storms in 1912 & 1956 on June 13."That means Cristobal is thesecond-earliest named storm to make landfall in Louisiana since records have been kept, he said.Tropical storm warnings had been posted for much of the Louisiana coastline, Mississippi, Alabama and portions of the Florida panhandle."Do NOT focus on the center as impacts will occur outside of the cone, especially east of the center," the National Weather Service in Mobile said on their website. "Heavy rainfall of 4-6" with higher amounts up to 10" possible for coastal Alabama and southeast Mississippi."

Flooding will be the biggest concern

Impacts from the storm's landfall will be felt hundreds of miles away. Neighboring states to the east such as Florida, Alabama, Mississippi, Georgia, even the Carolinas will pick up several inches of rain in a short period of time which could trigger flash flooding. 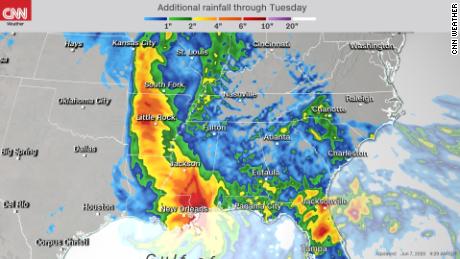 Widespread rainfall along the coast will likely be in the 5-10 inch range, with some areas picking up at least a foot total. These numbers alone would be impressive and cause flooding, but the problem for some of these states is that they have been dealing with excessive rains for the past month, so the ground is already saturated. This will exacerbate the flooding concern for states like Louisiana, Arkansas, and Florida, which have already received at least 8-10 inches in just the last 30 days.The storm will continue to progress northward into states including Iowa and Wisconsin that rarely see tropical systems in their backyard. While the storm will significantly weaken once it makes it that far north, it will still be able to produce several inches of rain for cities like Madison and Oshkosh, Wisconsin, as well as Cedar Rapids and Dubuque, Iowa.In addition to most Gulf Coast states, Arkansas and Missouri are also under flood watches in preparation for heavy rainfall to those states in the next 72 hours.

Tornadoes likely along the Gulf Coast

Another concern is the potential for severe weather. Tornadoes and water spouts –Read More – Source