"We have all these marches and protests, what's next?" Timothy Hunter, 21, one of the founding members of Strategy for Black Lives, told CNN. Members of the group have helped organize major events in New York over the past two weeks, including last Thursday's memorial march for George Floyd in Brooklyn. The group also participated in protests at the Barclays Center the previous weekend and marched from Foley Square to Bryant Park earlier last week.Even as members of Strategy for Black Lives are partaking in demonstrations, the group remains focused on the future.According to their mission statement, Strategy for Black Lives intends to "organize, educate, and engage communities to raise awareness of America's history in the mistreatment of marginalized populations." They came up with the NYC Organizing Communities for Accountability and Policy reform movement, which is centered around three core principles: organizing communities, accountability and policy reform. The group is committed to "a multi-pronged approach," founding member Frantzy Luzincourt, 21, told CNN, that combines on the ground demonstrations, policy conversations and lobbying efforts.The movement echoes the Safer NY Act, a series of bills related to police reform under consideration by the New York State Legislature."We have been tracking legislation and fully support the passage of the collection of bills known as the Safer NY Act," Strategy for Black Lives wrote in a statement.The group has created a list of specific actions regarding police reform they want to see taken by officials in their community, including New York City Police Commissioner Dermot Shea, First Deputy Commissioner Benjamin Tucker, and New York state Deputy Secretary of Public Safety Jeremy Shockett, as well as New York City Mayor Bill de Blasio and New York Gov. Andrew Cuomo.The group is focused on legislation that is part of the Safer NY Act, including: repealing 50-a, a law that New York officials have used to refuse to disclose records for officers involved in misconduct; the Police Statistics & Transparency (STAT Act), which would mandate that police departments across the state document all instances of enforcement of low-level offenses including demographic and geographic data; as well as legislation to curtail "unnecessary arrests for non-criminal offenses." The group also hopes to "bring an end to qualified immunity" for police officers. They believe that no one should be free from the rule of law. The group is also reaching out to New York state Sen. Zellnor Myrie, the legislator who was pepper sprayed and handcuffed at a demonstration last weekend, to discuss ways to assist in his legislating efforts. "Organizing and non-violent demonstration is only part of Phase 1," the group writes. "Phase 2 is encouraging the young people to be civically engaged and be the change agents in their local community."

A call to action

Strategy for Black Lives was born out of a discussion between Luzincort and Patrick Reyes, 22, while they were attending a barbeque on May 26. The pair talked about the video of a white police officer, Derek Chauvin, kneeling on Floyd's neck. Floyd died afterward in police custody. Recognizing the need for organization, both young men posted on their respective social media accounts that they wanted "to take a stand," Luzincort told CNN. "Once outside opens up we definitely need to take to the streets and make our voices heard against all these injustices. Black bodies seem to be dispensible… sickening. #icantbreathe," Luzincort tweeted on May 26. Reyes reposted the tweet on Instagram."HMU if you're interested in organizing to amplify the voices of those being deliberately silenced," he said. "COVID shouldn't foster complacency."Within days, Luzincort and Reyes pulled together a network of young people of color and allies that included friends from all over the city, including Hunter and Imxn Abdul, 22. Within days, the group had convened about 30 members between the ages of 20 and 25. They began protesting, attending the demonstrations at the Barclays Center in Brooklyn.When the group recognized that the protests were beginning to turn violent, they decided that strategy was critical. "Everybody's angry and everybody's upset, but we have to figure out how we are going to organize and strategize," Hunter told CNN.The Strategy for Black Lives coalition held their first strategy call a couple hours after the violence broke out at the Barclays Center on May 31. The group now has more than 1,300 followers on Instagram, and their Instagram page points users to a volunteer sign-up Google form."During our first call we recognized we need more than just protests, we need more than just action in terms of physical, we want policies, laws passed," Luzincort told CNN. 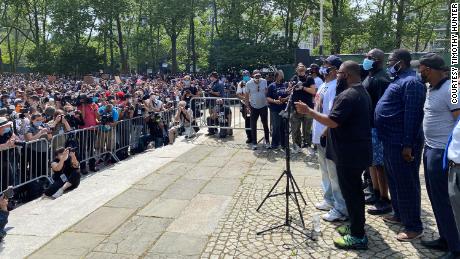 On Thursday, Luzincort and Hunter helped organize the Thursday memorial service for Floyd and the march that followed across the Brooklyn Bridge with Terrence Floyd, George's brother and Rev. Kevin McCall. Dressed in uniform — black shirts with whistles and megaphones — Luzincort, Hunter and their team went early to help set up."We were at the forefront of something special," Luzincort said. "It wasn't just us organizing change, but it was us understanding the pain that George Floyd's family has gone through." 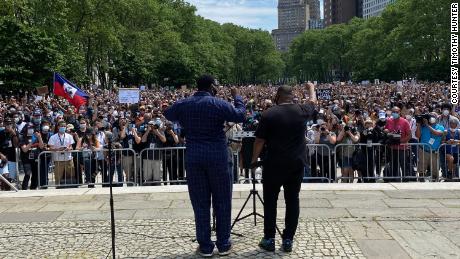 When de Blasio showed up at the demonstration at Cadman Plaza Park, Hunter said the crowd started to boo. Terrance Floyd and McCall redirected focus, telling the crowd, "We're not here for the mayor, we're here for George Floyd.""Being able to be so close to someone who wants this to be peaceful and nonviolent and make sure that people are being heard was moving," Hunter told CNN. Also on Thursday, Reyes attended a press conference at Grand Army Plaza in Brooklyn with city officials, during whicRead More – Source