But the nation's top infectious disease expert, Dr. Anthony Fauci, has been warning Americans about the risk of further spread of the virus. On Wednesday, Fauci, the director of the National Institute of Allergy and Infectious Diseases, joined the US Department of Health and Human Services' podcast "Learning Curve" and gave his expertise on the pandemic and the vaccine development process.He also defended the stay-at-home orders as having saved "millions of lives," and drew attention to anti-science bias and the disproportionate impact the virus is having on the black community.

On "anti-science bias" in America

Fauci said "anti-science bias" in the country can be problematic."One of the problems we face in the United States is that unfortunately, there is a combination of an anti-science bias that people are — for reasons that sometimes are, you know, inconceivable and not understandable — they just don't believe science and they don't believe authority," Fauci said."So when they see someone up in the White House, which has an air of authority to it, who's talking about science, that there are some people who just don't believe that — and that's unfortunate because, you know, science is truth," Fauci said. "It's amazing sometimes the denial there is. It's the same thing that gets people who are anti-vaxxers, who don't want people to get vaccinated, even though the data clearly indicate the safety of vaccines," Fauci added. "That's really a problem." Trump has frequently disregarded expert advice — and often the guidance of his own administration — during the pandemic. He long touted the use of the anti-malarial drug hydroxychloroquine as a treatment for Covid-19 despite a lack of medical evidence, and the Food and Drug Administration revoked its emergency use authorization for the drug earlier this week. His suggestion that ingesting disinfectant in April was a potential treatment — he later said he was joking — was quickly denounced by medical experts. And he has refused to wear face masks in public despite widespread beliefs that doing so slows the spread of the virus.

On the vaccine process

The process of getting a United States coronavirus vaccine candidate into a Phase 1 trial happened at record speed, according to Fauci.Fauci credited the Chinese for publishing the sequence on the open database on January 10, and the next day, the US said, "We got to jump on this." On January 15, the US began the development of a vaccine candidate, Fauci said. "Sixty-two days later, we had a product that we put into clinical trial, in a Phase I to see if it's safe and does it induce an immune response. That is overwhelmingly the quickest that has ever been done," Fauci said. Fauci said there are a number of steps to develop a vaccine, but the reason they were able to do it so quickly is "that we proceeded what's called 'at-risk'" for finances."What happens is that in the standard way of developing a vaccine, you don't jump to invest in the next step until you're pretty sure that the step you're in is working," Fauci said. "Given the fact that we needed to do this as quickly as possible without sacrificing safety or scientific integrity, the federal government partnered with multiple of these companies and said, 'Guess what, we're going to move fast and we're going to assume we're going to be successful. And if we are, we've saved several months. And if we're not, the only thing we've lost is money. But better lose money than lose lives by delaying the vaccine.' So, right now, the initial data from the study showed that. It makes me cautiously optimistic that we can induce a response that would be protective."

Social inequalities are among the factors behind why the black community in the United States has "suffered disproportionately" from Covid-19, Fauci said."African-Americans have suffered disproportionately from coronavirus disease. They've suffered in that their rate of infection is higher because of the nature of the economic status that many of them find themselves in where they're outside working, being unable to physically separate," he said. 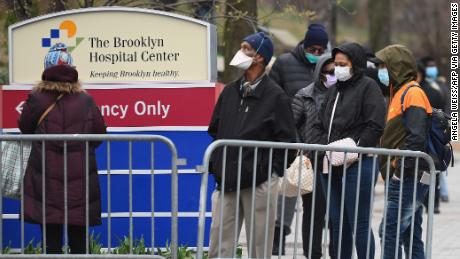 "And then when they do get infected, given the social determinants of health which make it for them, have a higher incidence of diseases like hypertension, obesity, diabetes," Fauci said. "They are at much greater risk of suffering the deleterious consequences including death."Read More – Source