Notably from Lewis Hamilton, a six-time world champion and the first and only Black driver to compete in F1, who has been a powerful voice following Floyd's death in Minneapolis last month. Visit CNN.com/sport for more news, videos and featuresHamilton has joined protests, set up The Hamilton Commission to increase diversity in motorsport and called out F1's "biggest stars" for "staying silent … in the midst of injustice."For his part, Ecclestone, who was replaced as chief executive of Formula One in 2017 after nearly four decades in charge, praised how Hamilton has spoken out for equality. "Lewis is a little bit special," Ecclestone, who these days has an advisory role with F1 as Chairman Emeritus, told CNN Sport's Amanda Davies. "First, he's very, very, very talented as a driver and he seems to be now extremely talented when's he standing up and can make speeches."This last campaign he's doing for Black people is wonderful. He's doing a great job and it's people like that — easily recognisable — that people listen to."READ: Former NASCAR driver Willy T. Ribbs says organization is 50 years late but welcomes the culture shift

'Completely stupid taking all these statues down'

However, Ecclestone doesn't think incentives like The Hamilton Commission will have a tangible impact on the sport."I don't think it's going to do anything bad or good for Formula One," he said. "It'll just make people think which is more important. I think that's the same for everybody. People ought to think a little bit and think: 'Well, what the hell. Somebody's not the same as White people and Black people should think the same about White people.' "In lots of cases, Black people are more racist than what White people are."CNN challenged Ecclestone over the assertion and he was unable to provide any concrete evidence for the baseless claim beyond saying that he had "noticed" it over the years.The 89-year-old continued by saying that changing attitudes towards race won't come "easily," scorning the dismantling of statues of slave trade figures — a move Hamilton backed when the statue of Edward Colston was torn down in the English city of Bristol. "I think they need to start being taught at school," said Ecclestone. "So they grow up not having to think about these things. I think it's completely stupid taking all these statues down. They should've left them there. Take the kids from school to look and say why they're there and what the people did and how wrong it was what they did." 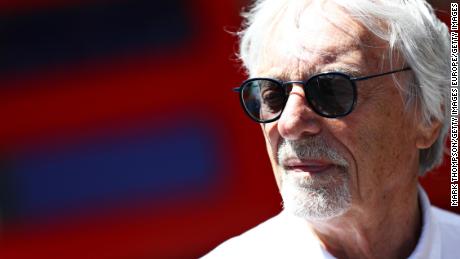 During his time at the helm of F1, Ecclestone brought in more races in new regions and attracted fresh interest in the sport. The season preceding Liberty Media's $8 billion takeover in 2017 drew 400 million unique TV viewers across 200 territories. The 2016 championship saw 21 races in 21 countries and five continents. In April, billionaire Ecclestone and wife Fabiana Flosi, 44, announced they were expecting a baby. Ecclestone's fourth child will be born this summer and when the announcement was made, he said he saw no difference "between being 89 and 29."The Briton is no stranger to controversy. In 2009 he praised Adolf Hitler for being "able to get things done" — comments he later apologized for — while he has also backed Vladimir Putin's controversial policy towards homosexuals and said that women should dress in white "like all other domestic appliances." READ: Lewis Hamilton attends Black Lives Matter protest, organizes commission to increase diversity in motorsport

Reigning world champion Hamilton recently referred to F1 as a "white dominated sport," while the governing body has just launched the #WeRaceAsOne initiative which seeks to fight the challenges of Covid-19 and condemn racism and inequality. A task force has subsequently been set up to increase diversity and inclusion in F1, alongside a foundation to help finance internships and apprenticeships for under-represented groups. Asked whether F1 should have done more to address the issue of diversity and inclusion, Ecclestone said: "I don't think anyone bothered about it before. "I think it's an important issue, but it's been there so long [and] nobody's done anything. Why didn't someone do something two or three years ago?"They're too busy trying to win races or find sponsors or something."READ: Lewis Hamilton 'completely overcome with rage' following George Floyd's deathIn a recent article for Read More – Source