After two weeks at Coney Island Hospital, Lin came back to his colleagues with first-hand knowledge of how to handle a Covid-19 outbreak — and, perhaps most importantly, he returnedas a living testament to the effectiveness of personal protective equipment."What we brought back, which is super helpful, is a degree of reassurance," he said."There's a tremendous amount of relief that (colleagues) know that what we're doing at our site locally is at least (as good), if not better, than what we were doing in New York in terms of personal protection, and everyone was fine in New York."Lin was one of over 50 clinicians affiliated with Vituity, a California-based health care company, who ventured to New York during its coronavirus surge to treat patients in overwhelmed hospitals. Now the situations have flipped. Cases have consistently declined in New York over the past few months even as they have increased in California, despite the state being the first to initiate stay-at-home orders. In late May, the seven-day moving average of new coronavirus cases in California passed that of New York and has only increased since, pushing toward a seven-day average of nearly 8,000 cases a day. Covid-19 hospitalizations in California are up 44% and people in intensive care have climbed by 34% over the past two weeks, Gov. Gavin Newsom said Wednesday. 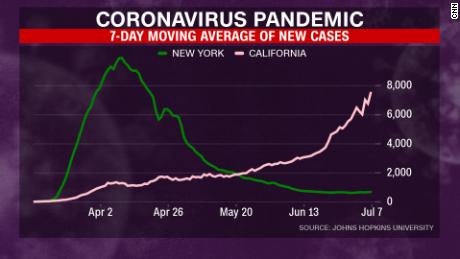 As these cases increase across the country's South and West, volunteers like Lin find themselves the foremost coronavirus experts in their home hospitals. They're also still healthy and, as such, a symbol of comfort for anxious colleagues."I think that in general has let a lot of people relax," said Dr. Stephanie Loe, 39, who spent two weeks in late April to May in the ICU at Elmhurst Hospital in Queens and another two weeks in May in the ICU at North Central Bronx Hospital."The fact that I went and didn't get deathly ill, and I went back a second time and still didn't get deathly ill, I think people are reassured by that." Aside from those psychological benefits, Lin and Loe said they learned practical lessons that can be broadly broken up into two categories: clinical and structural. How do you treat patients with Covid-19? And how should the hospital be set up to provide the best care? 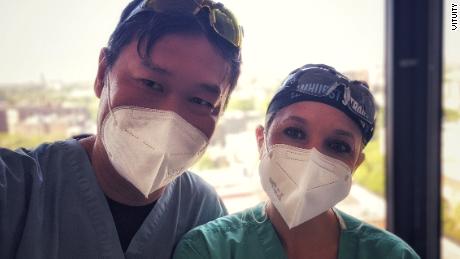 On the clinical side, Loe said one of the biggest things she learned was the drawbacks of putting patients on ventilators. In the early days of the pandemic, the thought was to put patients on mechanical ventilators sooner rather than later, but the treatment was not as effective as originally hoped."Since that experience, I am very reluctant to put a patient on a ventilator unless it's absolutely necessary," she said.Instead, she prefers to treat patients with supplemental oxygen or a less invasive machine like a high-flow nasal cannula, which gives a boost of oxygen into a patient's nose. 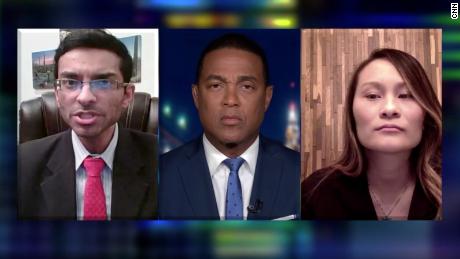 Other clinical tips have shown some small positive signs, such as "proning" patients by placing them on their stomachs, drugs such as remdesivir, or convalescent plasma treatments. But those are not cure-alls, and there is still so much unknown about how to treat Covid-19 patients."None of those to me, even now, have shown any real promise right before my eyes that I could say 'oh this is the answer,'" Loe said. "Just the fact that we don't have the answer right now, it still feels a little bit helpless."Lin said the lack of a treatment left him feeling similarly helpless at times in New York."Any disease process where there's not a definitive intervention that we can do, whether it's cancer or Covid-19, there's a degree of helplessness that all providers feel," he said.

How to prepare a hospital for a Covid-19 surge 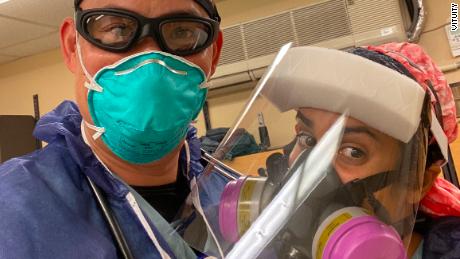 The other major lessons learned were centered on how to set up a hospital with surge capacity to avoid becoming overwhelmed. During Dr. Loe's time in New York, the surge of so many patients at once meant that they were not able to provide the best possible care to everyone who needed it."There was such a high, high volume of people that got it and got so sick from it all at one time, I think that the care that they could have received if the volume was reasonable would have been better," she said. "It was just a complete disaster situation, and when you're in a complete disaster situation where you're doing everything you can and nothing is helping, it feels helpless." 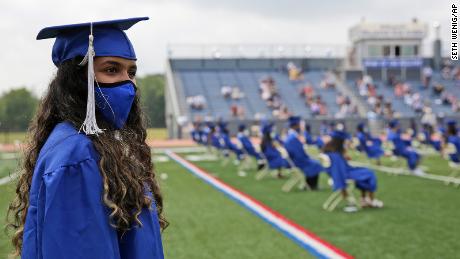 Both Dr. Lin and Dr. Loe are emergency medicine physicians who were thrust into working in the Intensive Care Units, or ICUs, while in New York. It was an unfamiliar position for them; Lin said he hadn't worked in an ICU in 22 years. But there were not enough ICU specialists, known as intensivists, or critical care physicians to go around, so they had to mRead More – Source

US considering measures against TikTok and other Chinese apps